Global solidarity with shopworkers in the UK 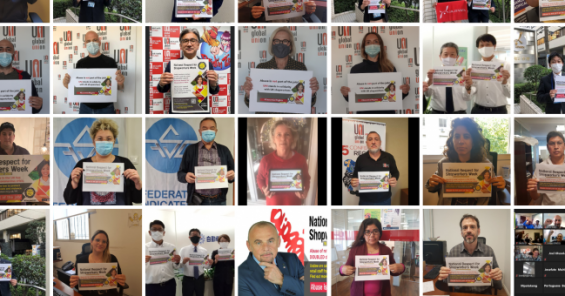 UNI Global Union affiliates around the world have shown their support for Usdaw in the UK as it marks National Respect for Shopworkers Week from 16 to 22 November.

The union has been running the event every year since 2002 as part of its Freedom from Fear campaign. However, this year Respect Week is even more important as research by Usdaw has shown that abuse, threats and violence against retail workers has doubled during the pandemic.

“I’ve been threatened to be spat at and given Coronavirus. I’ve been pushed over, its daily occurrences.” She said panic buying at the beginning of the pandemic, as well as people not wanting to queue had led to attacks from customers. And, even though enforcing social distancing is for the safety of the public as well as staff, “We get mouthfuls of abuse back for doing it,” she added.

Violence against retail workers is a global problem and more than 20 UNI affiliates from Canada to Japan, and Turkey to Australia have shown their solidarity with shopworkers in the UK on social media.

Affiliates in Australia and Japan have legislation that imposes fines on people who attack shopworkers and Usdaw has launched a parliamentary petition calling for a new law to make violence against retail workers a specific crime.

“Retail workers have gone the extra mile in keeping us provided with food and supplies during the pandemic, despite the risk to themselves and their families.  Is it so much to ask that essential workers are treated with respect? Tougher laws and stronger enforcement are needed to make this shocking behaviour stop. It is simply unacceptable that shopworkers are subjected to this type of abuse, pandemic or not.”