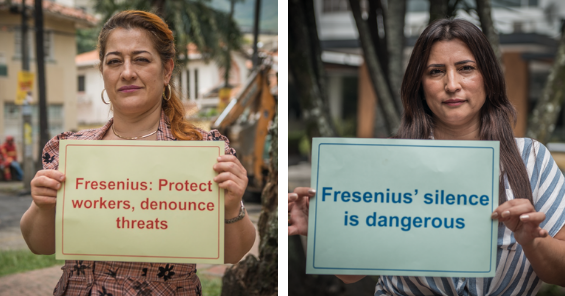 The campaign focuses on the safety of two union leaders at Fresenius’ Quironsalud clinics in Medellin and Cali who received death threats. Since the first threat was received in February 2021, local and global unions have repeatedly called on Fresenius and Quironsalud management in Europe and Colombia to publicly condemn these attacks on workers’ rights.

Despite multiple meetings with the company, including with top-level management, Fresenius refuses to take this step that could protect workers’ lives.

“Fresenius’ silence is dangerous. It is totally unacceptable that it refuses to publicly denounce death threats made against their own workers—especially in a country with an atrocious record of violence against social leaders,” said David Boys of the Fresenius Global Union Alliance.

“We are not calling for Fresenius to act just because it is the right thing to do. We are demanding action because the company’s voice can protect workers,“ said Alke Boessiger, Deputy General Secretary of UNI Global Union. “A global operation requires global accountability, and Fresenius cannot continue to reject its responsibility to Colombian workers.”

Both death threats were made while negotiations for collective agreements in Colombia were stalled, and the union was deciding whether to strike.

“I received an anonymous phone call threatening my family and me. Colombia is one of the countries with the highest level of violence against trade unionists. And even after repeated requests, I have not received any support from my employer,” said Claudia López, a Fresenius/Quironsalud worker and president of the SINTRACLÍNICA union in Medellin.

The International Trade Union Confederation has ranked Colombia one of the worst countries in the world to be a worker—with a disturbing pattern of “union-busting” and “murders with impunity” of union leaders in the country.  Since 2016, roughly 1,300 union leaders and social activists have been killed in the country, and an unknown number more have been threatened. At least 135 leaders have been killed in 2021 alone.

Colombian employers condemning threats against union activists has helped ensure worker safety in the past. For example, the threats against the president of ULTACLARO, a UNI Global Union affiliate, subsided after her employer telecommunications company Claro denounced this violence.

Now the global union federations, representing their affiliated unions in more than 150 countries, and the Fresenius Global Union Alliance are once again calling on the company to publicly denounce the death threats and protect its workers.

Launched in May 2019, the Fresenius Global Union Alliance is brings together unions from around the world to reach a global agreement with the company. The alliance believes trade union cooperation on a global level will elevate working conditions and care quality in Fresenius’s operations worldwide.