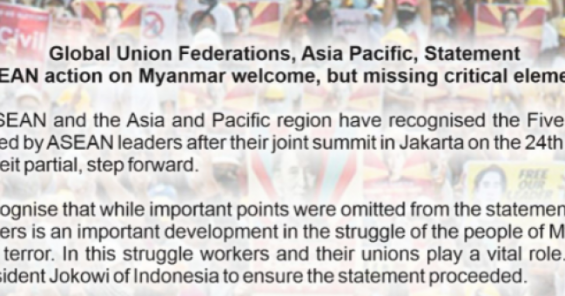 The Asia Pacific Regional Secretaries of the Global Union Federations released a statement today on the recent Five-Point Consensus issued by the ASEAN leaders on 24 April.

The regional union leaders expressed appreciation to the leadership of President Joko Widodo of Indonesia for shepherding the rare statement that addresses directly on an ASEAN member state’s political situation.

However, the fact that the leader of the military junta was present at the ASEAN leaders’ summit meant key concerns were left out.

The GUFs-AP leaders lamented the exclusion of the National Unity Government from the meeting and that the statement did not prevent further deaths from occurring in the hands of the military junta.

They pressed for the release of political prisoners and call upon the junta to stop targeting trade unionists through arrests, harassment and even torture.

The union leaders also call for the restoration to the rights of freedom of assembly and association in Myanmar and urged the ASEAN leaders to continue to pressure for the end to the military rule and for the civilian government to be restored.

UNI Apro Regional Secretary Rajendra Acharya welcomed the steps taken by ASEAN leaders to end the terrible human rights tragedy executed by the Tatmadaw in Myanmar. In line with the joint statement of GUF-AP, he emphasized that the long-term solution can only be processed if political prisoners are released and civilian government is restored.

He applauded the many trade union leaders and workers who have sacrificed their lives and safety to lead and participate in the Civil Disobedience Movement,  saying, “Therefore, on this International Workers Memorial Day, let us pledge to continue to work for the restoration of full democracy in Myanmar. This is the best way we can honour the sacrifices of the hundreds and thousands of Myanmar union leaders and members.” 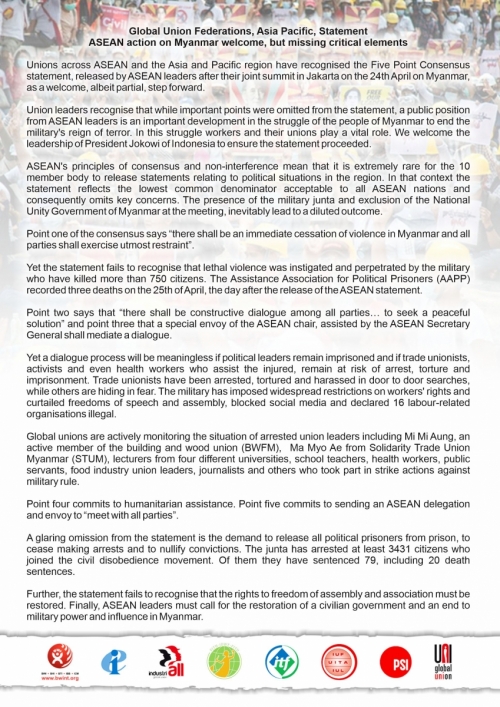