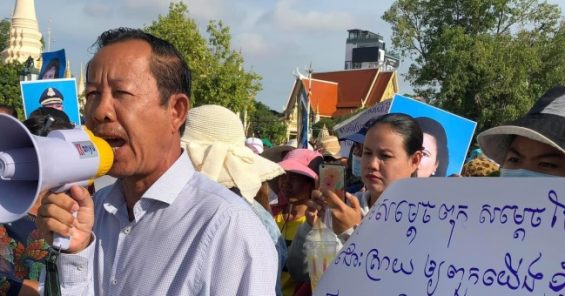 Global Union Federations with affiliates across Asia Pacific region strongly condemn the arrest of Rong Chhun, President Cambodian Confederation of Unions and calls upon the Royal Government of Cambodia to drop the charges and immediately release him. Rong Chhun, one of the most outspoken trade union leaders in Cambodia and former President of the Cambodian Independent Teachers Association, has always been at the forefront of the fight to protect workers rights.

On 21 July, Rong Chhun spoke to the media about the loss of livelihood and land for farmers after he made a field visit to the Vietnamese border. He was accused of spreading fake news by Cambodia Border Committee and later arrested on the trumped up charge of “incitement to commit a felony or cause social unrest”. In an interview to Free Cambodia Radio hours before his arrest, he denied spreading false information about alleged community land loss along the border.

Earlier, Rong Chhun picketed with hundreds of workers terminated due to the closure of Violet Apparel. He also called for the release of four members of CITA namely, Peat Mab, Sun Thun, Chhum Chan and Keo Thay, who were detained for making comments on public health issues during school closures. On 1 July, Rong Chhun wrote to the Cabinet urging the government to respond proactively to the allegations made by the European Union and to make improvements on human rights and democracy before the Everything But Arms trade preference is due to be withdrawn on 12 August.

The harassment of trade unionists and suppression of the right to peaceful assemblies and freedom of expression deepens our serious concerns about the continued violation of trade union and human rights in Cambodia.  This punitive crackdown has meant that trade union activists are routinely intimidated, persecuted and arrested. The arrest of Rong Chhun, set against the backdrop of an economic downturn, shows that the government is cracking down on trade union activities and any criticism of the government’s policies.

The Global Union Federation and their members across Asia Pacific region have legitimate concerns over the impact of government’s policies. Their freedom to speak and represent the interests of the working people, as well as the right not to be penalized for the opinions they express is indispensable to the free exercise of freedom of association.

We support the recommendations made by the UN Special Rapporteur on the situation of human rights in Cambodia, among other to:

e) Allow civil society organizations to undertake activities at the subnational level without harassment and surveillance or any undue restrictions;

f) Allow peaceful demonstrations in compliance with the Law on Peaceful Demonstration and its implementing guidelines and stop the excessive use of force when policing assemblies;

g) Launch a participatory process, including consultation with civil society organizations, to review and amend, as necessary, the Law on Political Parties, the Law on Associations and Non-Governmental Organizations, the Trade Union Law and the Telecommunications Law to bring them into line with international human rights standards.

We request the Cambodian government to uphold its obligations to protect and uphold the principles in ILO Convention 87 and international human rights treaties as recommended by the UN Special Rapporteur.

Rong Chhun, as well as other trade unionists detained and sentenced for exercising their right to free expression, must be released immediately and all charges against them must be dropped.