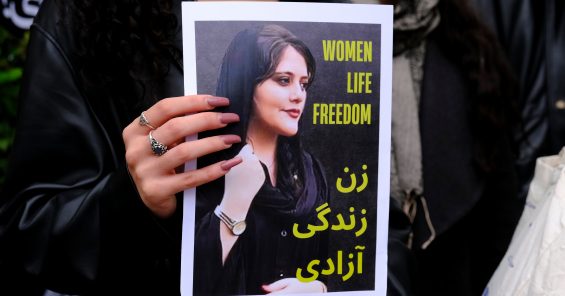 The International Trade Union Confederation (ITUC), the Trade Union Advisory Committee to the OECD (TUAC) and the Global Union Federations condemn the continued brutality of the Iranian authorities against their own people and call for stronger international pressure against the regime. Some 100 people have been killed and many more injured as public fury over the killing of Mahsa Amini has continued. Amini was killed by religious police simply for not complying with the country’s draconian dress code.

“The entire international trade union movement pays homage to the incredibly brave people who are standing up to the vicious repression being perpetrated by the leaders of the Iranian theocracy. The resistance is being led by women and girls who, at great risk to themselves, want to bring an end to the misogyny and subjugation of basic rights that are the essence of the religious and political elite. We salute them and stand with them in solidarity,” said ITUC General Secretary Sharan Burrow.

“The recent arrests of Iranian and international trade unionists are a desperate attempt by the regime to silence their critics and recast public outrage as being externally manufactured. The workers of Iran and their brothers and sisters around the world know the truth and call for their immediate release,” added Steve Cotton, Chair of the Council of Global Unions (CGU) and General Secretary of the International Transport Workers’ Federation (ITF).

Workers from all sectors have been at the forefront of the struggle for rights in Iran, which has one of the world’s worst workers’ rights records.

Many trade unionists are serving prison sentences for their advocacy of basic workers’ rights and Iran is ranked fifth (no guarantee of rights) in the 2022 ITUC Global Rights Index.

We demand the release of all imprisoned trade unionists and all others unjustly detained in Iran.