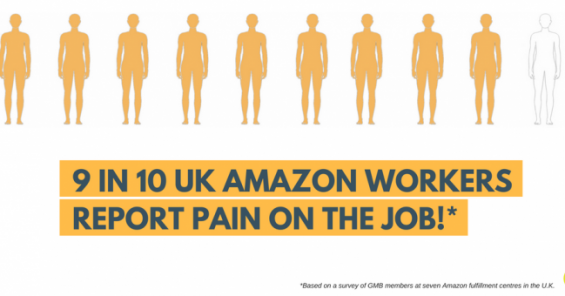 An investigation by UNI affiliate GMB has revealed the terrible working conditions and poor treatment of Amazon Associates in Amazon warehouses. Hundreds of ambulance callouts, workers in constant agony and heavily pregnant women being forced to work standing, have all come to light following the study.

A series of Freedom of Information Requests submitted to ambulance services across Britain show ambulances have been called out 600 times to 14 Amazon warehouses in the last three financial years. In more than half of those cases, patients were taken to hospital.

During the past three calendar years at Amazon’s Rugeley site, ambulances were called 115 times, including three for women due to pregnancy/maternity and three for major trauma.

The woman, who asked to remain anonymous, told the GMB, “When I found I was pregnant, I asked my manager to be transferred to a different department. I was told I could not be transferred and must continue picking, which involves bending, stretching and moving a heavy cart, and walking miles.

“After a while I told them I could not walk so many miles and I could not pick from low locations.  I had a meeting with a safety manager and was also told ‘it’s not what you want, it is what we decide’. My manager told me that most women are working on picking until their maternity leave. I know this is true, because I saw ladies with huge bumps picking.”

Other disturbing examples include electrocution, unconsciousness, building on fire and chest pains.

At a similar sized supermarket distribution warehouse a few miles away, there were just eight call outs during the same period.

Meanwhile, a survey of GMB members working at Amazon warehouses reveal 87% per cent are in constant or occasional pain due to their workload.

The findings will be presented to GMB’s 101st annual congress, which takes place in Brighton from June 4 – 6.

One woman in late pregnancy complained she was forced to work standing up for her entire shift, while a recent meeting of MP’s into the Gig Economy was recently told by an Amazon worker about a woman who had a miscarriage as a result of the continuous pressure to work and hit targets.

Mick Rix, GMB National Officer, said, “We really hoped Amazon had learnt its lesson from the report we published in 2014. Sadly that does not appear to be the case. Hundreds of ambulance call outs, pregnant women telling us they are forced to stand for ten hours a day, pick, stow, stretch and bend, pull heavy carts and walk miles – even miscarriages and pregnancy issues at work.

“I’ve never seen figures like this – Amazon Rugeley must be one of the most dangerous places to work in Britain. Amazon should be absolutely ashamed of themselves.

“GMB is here to provide a voice for our members and achieve dignity at work. Companies like Amazon should be treating staff with respect, not treating them like robots.”

U.K. Amazon workers are not alone in standing up for better jobs. UNI Global Union is coordinating efforts to reform the company’s brutal employment practices with unions in several countries including Spain, Germany, Italy, France, Poland, and the United States.

“Amazon’s high-pressure labour model puts production above safety and is a hazard for its workers throughout the world,” said Christy Hoffman, Deputy General Secretary of UNI Global Union. “The company’s disregard for workers’ safety is a global problem, and along with the GMB, we are standing with unions in nearly every country where the company operates to press for a global solution.”