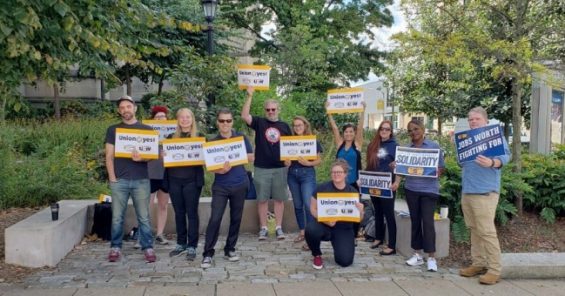 In a first for the U.S. tech industry, a group of white-collar workers voted to form a union. The approximately 80 employees of Google contractor HCL Technologies in Pittsburgh organized with the United Steelworkers.

“This is a major win for HCL workers and is a watershed moment for the tech industry,” said UNI General Secretary Christy Hoffman said about yesterday’s election. “Fair wages, respect, and a voice on the job go hand-in-hand with innovation, and UNI is committed to working with tech employees in the United States and globally to secure their rights at work.”

The new union members, who work alongside Google employees, are seeking a voice on the job and the opportunity to bargain over wages and working conditions.

“We deserve more respect, dignity and democracy in our relationship with our employer,” said HCL worker Joshua Borden. “We fought for a seat at the table, and today we won. We look forward to bargaining a contract that reflects our important contributions to HCL’s continuing success.”

The HCL workers are part of a two-tiered system in which they perform work “crucial” to Google’s business, yet have lower pay, limited benefits, and less paid time off. Their status as contractors makes them part of the highly-skilled precarious workforce that outnumbers direct Google employees and drives up Google’s massive profits through lower labor costs.

After yesterday’s vote, that will change.

“I’m honored that HCL workers chose to join our union and our fight on behalf of all working people,” said USW International President Thomas M. Conway. “They deserve to have their voices heard. Together, we’ll make sure that they are.”

HCL workers voted in favor of unionization despite a company-led anti-union campaign, which included mandatory meetings and the use of a controversial management consultant. Google, however, stayed neutral.

“Over the past few months, management has implied – and in some cases outright told us – that it’s better to just be quiet than fight for what’s right,” said HCL worker Johanne Rokholt. “Today we have proved that we are not willing to do that.”

The HCL workers are not alone.

UNI Information, Communications, Technology, and Services (ICTS) is putting the challenges and opportunities for IT and tech employees like those at HCL are at the forefront of its work. The sector’s affiliates in Romania, Serbia, Hungary, and Bulgaria have helped highly trained tech workforces win better wages and conditions. IT workers in Japan, Korea, Malaysia, Indonesia, Nepal, and Sri Lanka have come also together with support from UNI in to make advances on shared issues and develop common strategies to build power across the sector.

And in the United States and Western Europe, UNI ICTS affiliates are creating innovative structures and supporting tech workers’ core demands around their safety and well-being at work; their tenuous employment relationships imposed through different forms of temp work, contracting or self-employment; the impact of their projects on communities and society as a whole; and other worker-identified issues that have brought workers to unify both on-line and off-line, take collective action, and build a tech workers movement spanning the globe.

UNI unions represent some of the world’s biggest IT companies such as Atos, Accenture, Nokia, SAP, DXC, and IBM, but nevertheless most workers in the industry do not have a union voice.

“We hope HCL workers in Pittsburgh are the stream before the flood of union organizing in the tech sector,” said UNI’s Hoffman.

Thanks to Pittsburgh United for the photo.