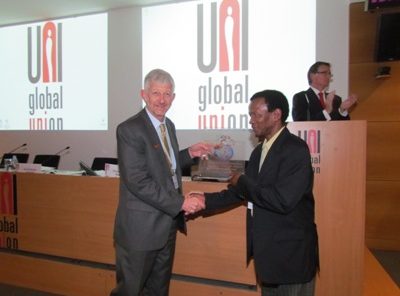 Zimbabwean care workers are taking to the streets and going on strike to demand better pay and protections against COVID-19. Many health care workers make the equivalent to US$30 per month—roughly one month’s rent in many areas of the African country. According to the Medical Professional and Allied Workers Union of Zimbabwe (MPAWUZ), workers are putting their life on the line without adequate safeguards, such as access to COVID-19 testing. To make matters worse, staffing levels have been reduced to critically low levels.

“Employers leave workers woefully unprepared and unable to respond to the mounting acuity levels as more and more people present with COVID-19 symptoms,” said Tecla Barangwe, General Secretary of MPAWUZ. Our members are risking their lives to save others and unable to pay basic needs, suffering as soaring inflation rates devalue the Zimbabwean dollar. Members of the public are paying for health services in US dollars, and our members are paid in a devaluing currency, meaning that their paychecks are worth less and less each month.”

Due to inflation, the union and negotiates with employers every three months. However, even with this arrangement, workers’ wages are still insufficient to make ends meet. The last negotiation, which took place in July, has resulted in major losses for workers.

Workers are also being exposed to the virus due to lack of adequate personal protective equipment (PPE) or regular testing. For example, some workers are being given cloth masks, which are not sufficient in a medical setting. Testing is only available in the major metropolitan centers, and even there, it is minimal. Workers who do test positive are being sent home, putting their families at risk, often with no support or medical treatment options offered by the employer. Adding insult to the injury, family members of workers who test positive do not have access to paid treatment either.

“Workers at testing centers know that tests cost 60 USD, so employers can afford to increase wages and even pay in USD, however, employers continue to state that they are also unable to keep up with rising costs” said Tecla Barangwe, General Secretary of MPAWUZ. “Workers in the medical sector demand a living wage in US dollars since all services are being charged in US dollars and workers are paid in local currency to save on labour costs.”

One big concern is the multinational company Lancet Laboratories, which operates around Africa and where, according to MPAWUZ, workers are exposed to COVID-19, are not provided without providing PPE or access to testing. “I believe employers should give an ear to workers concerns,” said Lancet laboratories workers committee chairman who was dismissed from employment after engaging in a strike “why does Lancet hold a grudge with innocent souls who are demanding a decent  living and trying to protect their families”.

“The situation for health care workers in Zimbabwe is appalling,” said Adrian Durtschi, Head of UNICARE. “These  workers are putting themselves at risk on the frontlines are unable to protect, feed and house their families.”

MPAWUZ continues to fight for workers and find solutions against extreme odds.