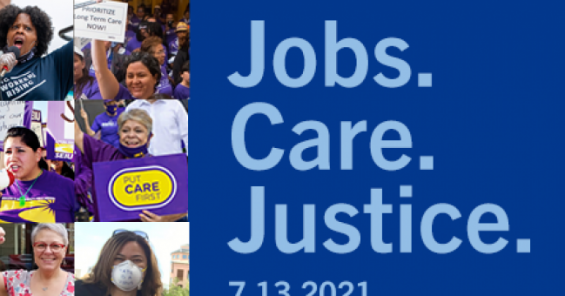 Home care workers across the United States will come together on 13 July to demand good union jobs, investment in care, racial justice and climate action.

Thousands of workers are set to arrive in Washington D.C. to call on Congress to approve the government’s US$400 billion spending plan for home and community-based services that will create a million new jobs.

Further activities are due to take place in 40 places across the country as part of the Home Care Day of Action, organized by UNI Global Union’s U.S. affiliate SEIU.

Some 90 per cent of home care workers in the U.S. are women, 62 per cent are people of colour, and three in ten are migrants. However, their median wage is one of the lowest in the country at only US$11.63 an hour.

In addition, black, brown and indigenous communities have borne the brunt of climate change and are more likely to feel the health impacts arising from fossil fuel use, industrial pollution and crumbling infrastructure. As the environmental crisis worsens, the more care work will be necessary – and the more difficult it will become to administer.

SEIU is calling for action on:

It is estimated the United States will need to fill 4.7 million new care jobs by 2028, but it’s hard to attract the workers with poverty wages, inadequate benefits and without the choice to join a union.

“Governments around the world must recognize care as part of the critical infrastructure of modern society. An investment in care has the potential not only to lift millions of women out of poverty, but also to enable women to join the labour market in greater numbers – a growth booster for any economy. We stand by SEIU in their demands for jobs, care and justice on 13 July.”