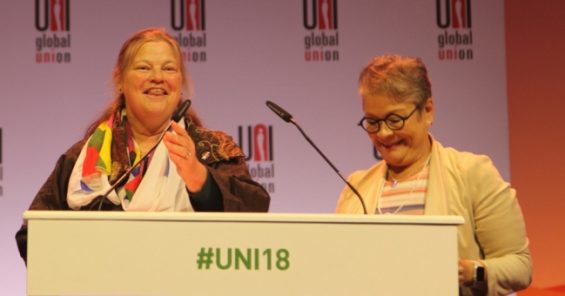 At the UNI World Women’s Conference in Liverpool, which brought together over 700 top union leaders from all over the world, Dr. Rebecca Johnson, Founding President of ICAN was rewarded with UNI’s Freedom From Fear Award. This was not the first award that ICAN and Johnson have received in the last year, following on from their Nobel Peace Prize win in Oslo late last year.

Johnson, who had just returned from a 6km march with 1000 Korean women in the demilitarized zone in Korea, said that building peace starts with ordinary people.

“We have a long way to go to make it happen for a safe planet, jobs for all and a world free of nuclear disarmament,” said ICAN Founding President Dr. Rebecca Johnson. “As I saw in Korea, peace is not just about the meeting of two vain men in Singapore – it’s the yearning of 80 million Korean people and the world.”

“We the people, and importantly, we the women, need to be arguing for peace and disarmament. We can’t leave it up to politicians to make all the decisions.”

“If the vain men don’t get on, they’ll get left behind!” said Johnson to applause from the floor.

“As long as women are being harassed and violated we know there cannot be peace.”

Johnson reiterated that ICAN winning the Nobel Peace Prize is only the start of the journey to implementing the UN Nuclear Prohibition Treaty.

“The Treaty puts legal responsibilities on individuals and companies as well as states, making it illegal to encourage or assist anyone in carrying out acts that the Treaty has banned, covering nuclear weapons acquisition and use, including manufacturing, testing, stationing, deploying and transferring nuclear weapons and their related technologies.”

Johnson emphasised that “the more women involved in the peace process, the better it is for the sustainability of diplomatic outcomes.”

When ICAN set up their Geneva offices, they reached out to UNI Global Union to work together. “We cannot build peace and disarmament unless we work together with organisations like UNI to transfer jobs away from the military industrial complex. Everyone should work in a safe and ethically responsible work place.”

Johnson vowed that ICAN will continue to pressure governments to reject nuclear weapons and sign and implement the ban treaty, until all nuclear weapons have been eliminated.