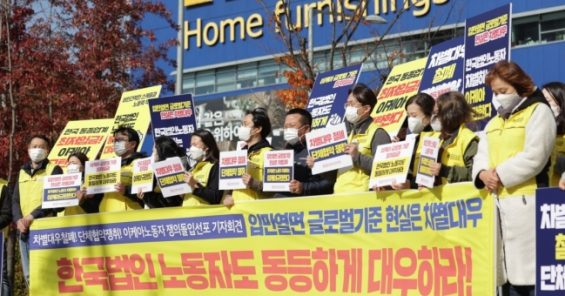 Since KFSU-IKEA Korea Workers Union’s (IKWU) establishment in February 2020, the union worked hard to achieve a first basic agreement with the company on April 17. The agreement was expected to pave the way toward a first collective bargaining agreement which ensure Korean IKEA workers receive equal treatment comparable to their overseas counterparts. Seven months later and after 28 rounds of negotiations, it was clear that a profit-before-people attitude still prevail among the IKEA Korea’s management.

The management’s insistence on adhering to their interpretation of IKEA’s global standards, which failed to address the key concerns of the union, had caused an impasse. The KFSU-IKWU declared a breakdown of negotiations on September 22 and its members voted to strike via picketing actions on 3 November. The management responded forcefully by separating union members, who wore picketing poster on their back, from non-union members in the workplace. 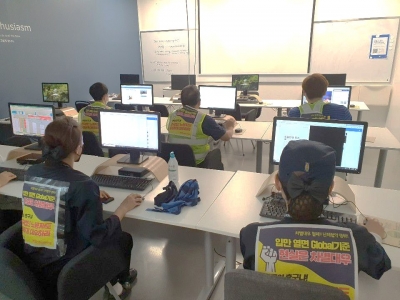 Comparative data of IKEA’s practice elsewhere show Korean workers receives the short end of the stick. Overseas IKEA units pay 150 percent of salaries as weekend allowances and 120 percent as special allowances for evening hours, but IKEA Korea does not pay them. IKEA Korea also ranks poorly in terms of benefits coverage when compared to other Korean hypermarts.

Sales volume in IKEA Korea had jumped three-fold despite the COVID-19 situation but the high returns have not been fairly shared with the workers who sacrificed their time and life. The union reported that some workers were injured and fell sick due to the heavy workload during this pandemic period.

Bro Jung Yoon-Tek, IKEA Korea Workers Union President, attending his first IKEA Alliance meeting organised by UNI Commerce on 23 November, highlighted the disturbing gig-economy style management practiced by IKEA Korea which have serious implications on a worker’s life. Flexible work arrangements were exploited by the management into their favour. IKEA workers had to stand-by on short notice and depriving them of having a normal social and family life outside of work. He appealed for solidarity with the IKEA Korea Workers and hopes that the IKEA head office will look at the Korean situation closely and find a solution.

UNI Apro Commerce Director, Alice Chang said, “We call upon IKEA management to come to the table to sincerely resolve the issues voiced by the union in the spirit of harmonious industrial relations and in line with international labour standards.”