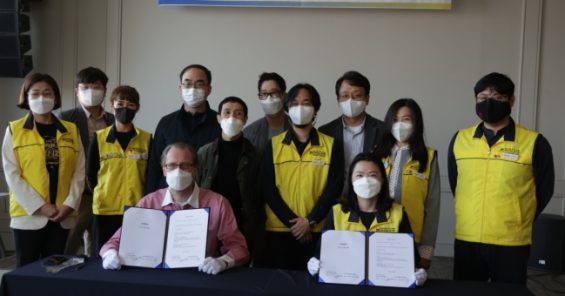 Following 40 rounds of negotiations, 140 days of industrial action, and four days of strike in the last 11 months, Korean IKEA workers have won better working conditions, rights, and pay through their first collective agreement with the company.

Their union, the IKEA Korea Workers Union, was established in February 2020, and they quickly won recognition thanks to the successful organizing campaign run despite the pandemic.

Sister Chung Min-Jeong, IKEA Korea Workers Union president said, “Today, I got the news that IKEA declared 2021 as a year of sustainability. It means that the company should respect workers, recognize the value of work and seek mutual cooperation between workers and management.”

Short and non-guaranteed working hours were the most critical issue for the workers. Irregular schedules and ever-changing shifts prevented workers from seeking additional employment. These conditions also made it difficult to establish a good work-life balance.

The collective agreement sets a floor for minimum hours and guaranteed break time. It also sets a standard of 12 hours of rest between two shifts to prevent sleep deprivation and overwork. New paid sick leave provisions mean that workers no longer have to choose between their financial stability and taking care of their health.

“This is a great momentum for IKEA Korea Workers Union to ensure freedom of association in the company,” said Sister Chung. “IKEA workers in Korea will be able to enjoy trade union rights without any threat or intimidation.”

“We welcome this ground-breaking collective agreement. The victories here show the power that dedicated organizing drives can make when accompanied by international solidarity,” said Mathias Bolton, Head of UNI Commerce. “We are looking forward to collaborating further with IKEA Korea Workers Union in our IKEA Global Trade Union Alliance.”

IKEA Korea workers’ win will hopefully be the first of many. UNI Apro Regional Secretary, Rajendra Acharya noted, “We will keep working with the Korean unions to achieve more collective agreements in more multinational companies.”