ILO calls sport, player unions and governments to the table over athlete rights 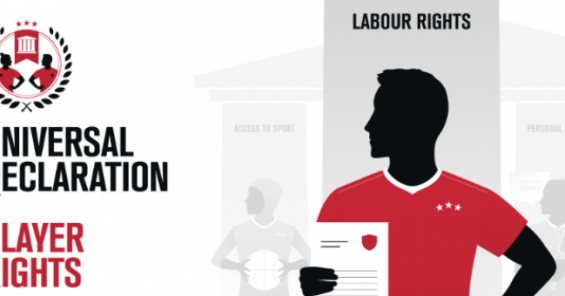 Geneva, 20 January 2020. Athlete rights, health and representation will be the focus of the International Labour Organization’s (ILO) inaugural global dialogue on decent work in the world of sport which opens today in Geneva.

“Players are people first and athletes second. They deserve the same protections as every working person. All too often, players are victims of serious abuses of worker rights including poor and late pay, unsafe work, sexual abuse, gender-based discrimination and racial vilification. Yet when players organize and collectively bargain, their sports have grown on and off the field enabling playing careers to flourish.”

The World Players Association will lead a diverse delegation of leading players and figures from its affiliated player associations in rugby, cricket, baseball, football and many other sports.

“The competitive and high-pressure environment of sport pushes players to the limits of their physical and mental health. This can make players particularly vulnerable to unnecessary injuries, that effect their careers and sometimes have lifelong consequences. It’s time for players’ rights to come first, if we are to achieve decent work in sport,” said Jonas Baer-Hoffman, Secretary General of FIFPRO, the global representative of professional football players, and a member of World Players’ Executive Committee.

“An athlete’s career is by its nature highly skilled yet short term, risky and precarious. Employers, governments and sports bodies therefore have a heightened duty and responsibility to ensure that the fundamental labour rights of athletes are protected and respected, including in relation to physical health, mental health and social wellbeing,” added the CEO of International Rugby Players, Omar Hassanein, who is also a member of the Executive Committee of World Players and chairs its authoritative World Player Development and Wellbeing Steering Committee.

All 187 member states of the ILO are bound to respect and promote eight fundamental labour conventions that include the rights to freedom of association and collective bargaining, equal remuneration and non-discrimination, and the abolition of forced labour and the worst forms of child labour.

In December 2017, the World Players Association launched the Universal Declaration of Player Rights to protect players from ongoing and systemic human rights violations in global sport. The Declaration sets a benchmark for international sporting organizations to meet their obligations to protect, respect and guarantee the fundamental rights of players.

The ILO Global Dialogue Forum on Decent Work in the World of Sport is taking place from 20 to 22 January in Geneva, Switzerland.

The World Players Association is the exclusive global voice of organised players and athletes across professional sport. A sector of UNI Global Union, it brings together 85,000 players through more than 100 player associations in over 60 countries. Its role is to ensure that the voice of organised players is heard at the highest levels in the decision-making of international sport.