International day of solidarity for DHL Express workers in Turkey 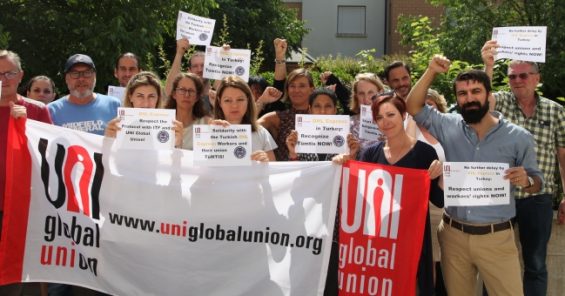 DHL Express in Turkey is abusing legal proceedings to object to recognizing workers’ union, Tümtis, and today unions from around the world—including UNI and our affiliates—are demanding justice at DHL Express.

Since 2012, Turkish union Tümtis has been fighting with DHL to obtain a union contract. The union cleared the first hurdle in 2013 when after 476 days on the picket line, Tümtis was recognised in the DHL Supply Chain.

After the UNI along with the ITF reached a protocol with the company in 2016, Tümtis began organising the DHL Express division and recruited the majority of the workers according to Turkish law.  According to that country’s labour law, as soon as union recognition is confirmed by the Ministry of Labour, negotiations must start unless an objection is made in court.

Tümtis obtained this recognition from the government, but DHL Express filed an objection in March 2017. Their objection has been a tactic used to prolong the recognition process while increasing pressure on individual workers through dismissals, discrimination, and suppressing the organising drive.

Now the court renewed their decision in favour of the union, and HR DP-DHL in Bonn raised again the possibility for an objection at the high court. This could delay the process even further.

Tümtis members at DHL began protesting the company’s first objection, and have been on the picket line for more than 320 days. They will continue to protest until they have justice.

“We must make sure that DHL Express removes their objection to Turkish workers’ union,” said Cornelia Broos, Head of UNI Post and Logistics. “The democratic processes embedded in the Universal Human Rights Declaration must be ensured, and that is why UNI is taking part in an international day of solidarity for DHL workers.”

UNI Post and Logistics and its affiliates are in solidarity with the Turkish DHL Express workers and their union Tümtis and will support them to finally gain recognition.