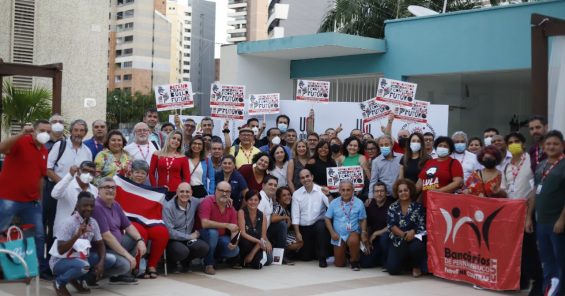 This week, the first International Trade Union Forum on the Impact of Digitalization on the Financial System took place in Fortaleza on June 27th and 28th. The event was part of the 5th UNI Americas Conference, which brought together over 600 union leaders from 24 countries and 124 organizations.

Participants sought solutions to combat the impact of digitalization on the financial system and automation of the sector.

According to UNI Finance’s President, Rita Berlofa, the financial sector is one of the most impacted by new technologies. Berlofa argued that the only way to confront the issues we face is to have strong unions that can negotiate collectively for better conditions.

“We are discussing the defence of democracy, because without democracy there are no workers’ rights, there are no unions and employers get a free-pass to dictate the terms of engagement,” she emphasized.

“We need to build a global alliance in defence of workers, and of public banks. In many countries, workers are not organized and union members face persecution”, says João Fukunaga, coordinator of the Company Committee of the Banco do Brasil Employees (CEEBB).

“We must organize to tackle the various negative impacts of digitalization we face – such as job losses, precariousness, and poor staffing. As workers, we must also share in the gains from technological advances to provide better health, quality of life and employment for workers,” said Neiva Ribeiro, vice president of UNI Americas Women.

“This is not only a Brazilian problem – we need to ensure that the digitalization of the financial system is regulated.  We need to make sure that labour rights are protected, and workers are organized to fight precarious work. Today we have the opportunity to work together to find solutions to the issues we face and start to build a fairer society,” concluded Juvandia Moreira, Contraf-CUT’s President.