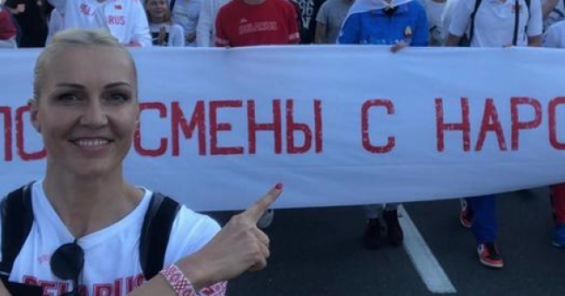 Photo: Belarusian basketball player, Yelena Leuchanka, has been been stentenced to 15 days in detention after protesting against the government (Credit: Yelena Leuchanka)

Arrests, threats and dismissals amount to ongoing violations of the Olympic Charter by Belarusian President, who also heads the National Olympic Committee, along with his son

The World Players Association today denounced all retaliation by the government of Belarus against athletes in the country who have joined together to support the mass protests against the disputed August presidential elections. World Players has endorsed the letter sent last night to the International Olympic Committee by the Free Association of Athletes of Belarus, “SOS_BY”, which documents 22 cases of reprisals made against athletes and others connected to their movement—including arrest, threats and dismissals.

World Players, along with other independent athlete groups and partners within the Sport and Rights Alliance, support the SOS_BY’s demands that the IOC investigate the targeting of athletes and other sportspeople in Belarus, hold the Belarusian Olympic Committee to account for these violations of the Olympic Charter, and ensure the victims receive remedies for the harms they suffered. This is particularly within the IOC’s responsibility and authority to do, given that the president of the Belarusian Olympic Committee, Alexander Lukashenko, has also been president of the country for 26 years and is behind the violent crackdown on hundreds of thousands of citizens, including hundreds of athletes, protesting the election results that most in the international community believe he falsified.

“In Belarus, we have a situation where the President of the country and his son are in charge of the National Olympic Committee, which is under the direct authority of the IOC, but they are using the apparatus as a weapon to further their own political agenda against outspoken athletes. The IOC must join with these courageous and principled Belarusian athletes in actions and not just words to ensure that human rights and sport are protected.”

One of the signatories named in the letter, top basketball player Yelena Leuchanka, was included in absentia owing to her wrongful arrest on 30 September 2020 and hasty sentencing to 15-day detention. World Players Executive Director Brendan Schwab sent a letter to Leuchanka, who was a two-time Olympian and played in the WNBA, the U.S. women’s national basketball league, to express solidarity with the principles underpinning her activism and concern for her rights, health and safety as the subject of cruel state-sponsored revenge tactics. Leuchanka’s lawyers have urged high profile athletes and sports teams and human rights experts around the world to elevate her case to bring a wave of solidarity that will pressure global sports bodies and Belarusian authorities to ensure her safe release.

In his letter to Leuchanka, Schwab wrote:

“Organised players worldwide are deeply committed to the very same principles which are underpinning the courageous activism, leadership and sacrifice that you and your compatriots in the Free Association of Athletes in Belarus are displaying on behalf of your country’s future.

“Many of your supporters, friends, former teammates, and fellow athlete activists have reached out to us and we are working with them and our affiliates and partners in the Sport and Rights Alliance to ensure that the powerful bodies that govern the world of sport—particularly the International Olympic Committee (IOC) and the International Basketball Federation (FIBA)—exercise their authority to safeguard athletes who stand up for what is right and to ensure that any member of the Olympic Movement who targets them is held to account.”

Read the letter to the International Olympic Committee from the Free Association of Athletes of Belarus (here).

Read the statements from World Players affiliates, including EU Athletes (here) and the WNBPA (here).