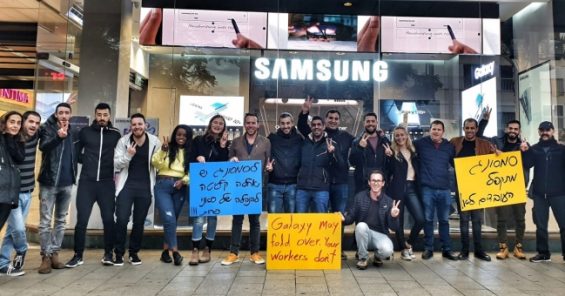 Isreal’s Labour Court ruled that Suny, Samsung’s official importer in the country, acted illegally and with intent to harm the employees’ organizing.

The case was brought by Histradurt after the company used a number of methods to prevent workers from having a fair collective bargaining agreement and retaliated against a union leader, which included a wage reduction, denial of incentives, and cancellation of vacation days.

The judge ordered the company to return and negotiate with the employees’ representatives and imposed a compensation in the amount of NIS 300,000 (approximately US$90,090) on the company.

Chairman of the Cellular, Internet and Hi-Tech Workers’ Union Yaki Halutzi welcomed the court’s decision and said: “Unfortunately, Suny was wrong to think that it would be able to dismantle the employees’ organizing, and the ruling confirms this. The employees’ unionizing is here to stay, and it’s better that instead of engaging in tricks, Suny’s management will help to reach a collective agreement for the benefit and welfare of its employees. “

The 250 workers joined with Histradrut two years ago, but since then the company has used a number of tactics to thwart workers’ initiatives. Last December, the employees were forced to go on strike.

“This is a big win for Suny workers,” said UNI ICTS Head Teresa Casertano, “but the fight is not over. UNI stands with Histadrut as it continues its drive to get a fair contract.”