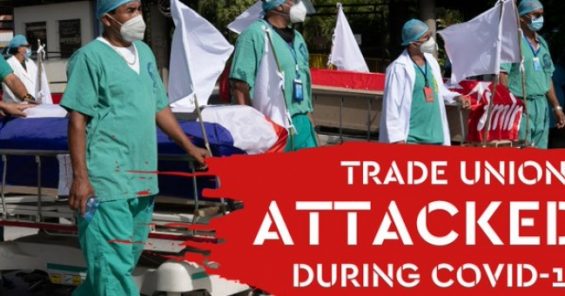 The ITUC’s annual Rights Index details a disturbing trend of employers and governments using the pandemic as cover to ratchet up an assault on workers’ rights.

“When COVID-19 hit, we learned who the heroes are. Workers everywhere cared for the sick, put food on our tables, and kept the economy moving. But despite all that, workers are under attack like never before,” said Sharan Burrow, ITUC General Secretary.

“Governments and employers exploited the pandemic to exploit the people the world depends on by increasing surveillance, breaking agreements, laying off workers, blocking and intimidating unions, and resorting to violence and murder.”

For example, the ITUC points to retail chain Falabella firing workers in Peru for organizing for safer jobs during the pandemic, and it notes Amazon’s ramped up surveillance on workers.

Unfortunately, UNI has documented rights abuses at many other multinational companies, like call centre giant Teleperformance. More than 100,000 of the French outsourcing company’s 380,000 employees are in countries the ITUC ranks among the ten worst for workers.

“The systemic attacks on workers’ rights documented by the ITUC should be a wake-up call to multinational corporations,” said Christy Hoffman, General Secretary of UNI Global Union. “Companies are responsible for conditions in their value chains—especially when they invest in and outsource to countries where rights are trampled and labour laws are not enforced, if they exist at all. This year’s Rights Index shows why stronger protections, including mandatory due diligence, are urgently needed.”