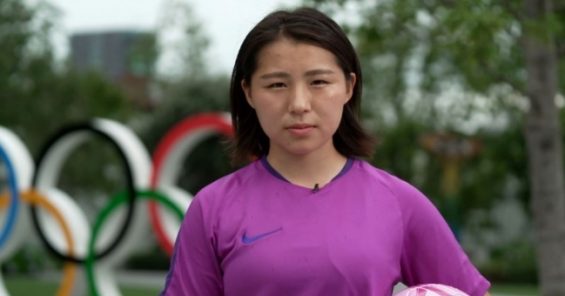 The 67-page report, “‘I Was Hit So Many Times I Can’t Count’: Abuse of Child Athletes in Japan,” documents Japan’s history of corporal punishment in sport – known as taibatsu in Japanese – and finds child abuse in sports throughout Japanese schools, federations, and elite sports. In interviews and a nationwide online survey, Japanese athletes from more than 50 sports reported abuses that included being punched in the face, kicked, beaten with objects like bats or bamboo kendo sticks, being deprived of water, choked, whipped with whistles or racquets, and being sexually abused and harassed.

“For decades, children in Japan have been brutally beaten and verbally abused in the name of winning trophies and medals,” said Minky Worden, director of global initiatives at Human Rights Watch. “As Japan prepares to host the Olympics and Paralympics in Tokyo in July 2021, the global spotlight brings a once-in-a-generation opportunity to change laws and policies in Japan and around the world to protect millions of child athletes.”

Human Rights Watch documented experiences of more than 800 former child athletes – more than 50 from in-person interviews, and 757 from an online survey – including Olympians and Paralympians. The survey had participants from 45 of the 47 Japanese prefectures, and 50 sports. Human Rights Watch also monitored Japanese media reports of child abuse in sport, contacted sports federations to assess the availability of hotlines, interviewed academics, journalists, parents, and coaches, and met in person with government and sport federation officials.

In 2013, while Japan was bidding to host the 2020 Olympics and Paralympics, a series of videos of high-profile elite athlete abuse cases, coupled with suicides of child athletes, spurred leading sports agencies to speak out on the need for child protection in sport. In 2018, a video surfaced showing an Aichi prefecture high school baseball coach repeatedly slapping, punching, and kicking the players on his team. In the video, the coach is seen striking at least five players hard enough to cause the teenage athletes to stagger backward.

Public outrage led to important reforms such as setting up hotlines to report abuse. However, Human Rights Watch found that these reforms are optional “guidelines” instead of rules, that progress has been uneven and unmonitored, and that there is no mandatory reporting of abuse complaints or statistics.

Human Rights Watch found that child abuse in sport remains accepted and normalized in many parts of society, and that it is difficult for young athletes to file complaints against a powerful coach or official. Schools and federations rarely punish abusive coaches, often allowing them to continue coaching, Human Rights Watch said.

“Sports federations in Japan are allowed to set up their own systems to track abuse and abusers – which many simply choose not to do,” said Kanae Doi, Japan director at Human Rights Watch. “This exposes children to unacceptable risks, and leaves parents and athletes with few options to file complaints or seek remedies against powerful abusers.”

Child abuse in sport is a global problem with a lack of unified, clear systems to address violence and abuse. The burden of reporting abuse is often on the victims, while the systems for reporting are opaque, unresponsive, and inadequate.

Worldwide, coaches and other abusers go unpunished or are promoted to positions in which they can threaten and silence their accusers. Two presidents of sports federations, in Haiti and Afghanistan, have been accused of sexual assault of female athletes over the last 18 months. The United States Olympic doctor Larry Nassar abused hundreds of female gymnasts over decades. Children and teens who come forward are often not believed when accusing powerful coaches who hold the athletes’ success hostage. On June 26, according to the New York Times, 22-year-old South Korean triathlete Choi Suk-hyeon committed suicide after filing many complaints with sport and government officials about the physical and psychological abuse she suffered.

“Sport can bring benefits like health, scholarships, and careers, but too often victims of abuse experience suffering and despair,” said Takuya Yamazaki, a sports lawyer on the Executive Committee of the World Players Association, the global athletes’ trade union who partnered with Human Rights Watch on the report. “One of the reasons why it is so hard to deal with cases of abuse is that athletes are not encouraged to have a voice. Just like the many brave athletes who are increasingly speaking up for their rights, sports bodies must show courage to deal with the past, if sport is to be a true force for good.”

Human Rights Watch’s main recommendation is that the country set up a Japan Center for Safe Sport, an independent administrative body tasked with addressing child abuse in Japanese sport to ensure reporting and tracking of abuse complaints, establish meaningful remedies for athletes and parents, and deter child abuse by identifying and decertifying abusive coaches.

With the Tokyo Olympic and Paralympic Games delayed until Summer 2021, Japan has one year to take convincing action before the games begin, Human Rights Watch said.

“Taking decisive action to protect child athletes will send a message to Japan’s children that their health and well-being are more important than medals – while placing abusive coaches on notice that their behavior will no longer be tolerated,” Worden said. “If Japan acts now, it can serve as a model for how other countries can end child abuse in sports.”