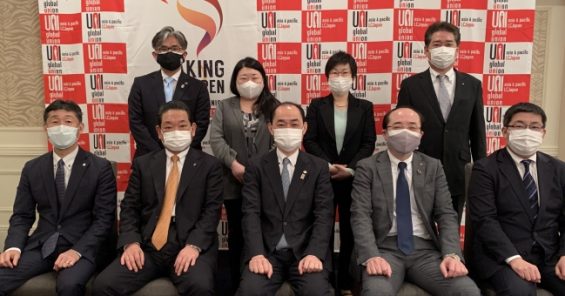 The 22nd UNI-LCJ Annual General Meeting was successfully held on 15 February 2021 in a hybrid fashion. The Japanese leaders gathered at the Hotel Metropolitan, Tokyo, and ably first dealt with the essential matters of reviewing activities reports, confirming of financial and auditors’ report, and adopting the plan of activities and budget for 2021, before proceeding to confirm the new leadership which saw Bro. Matsuura, President of UA ZENSEN, re-elected as the UNI-LCJ Chairperson, and Sis. Yoko Morikawa as the newly elected Executive Secretary for UNI-LCJ.

A special commemorative session held immediately after the election was attended by nearly 100 delegates, observers from affiliates, and colleagues from other GUFs and guests, most of whom observed the proceedings online.

Bro. Matsuura, in his opening remarks on behalf of UNI-LCJ, noted that UNI and UNI Apro have continued their tireless efforts to organize, lift up essential and vulnerable workers conditions in spite of the COVID-19 pandemic, and expressed his determination to continue to develop the labour movement in the Apro region by promoting partnership labour-management relations.

Mr. Iuchi, Director-General of the Ministry of Health, Labor and Welfare, emphasized in his solidarity remarks the importance of social dialogue between government, labour and management in order to overcome the difficult situation. Bro. Kozu, President of JTUC-RENGO in his video message called on the entire labour movement to work together to protect employment and livelihoods, expand the safety net, and realize a society with hope and security, despite the extremely difficult situation for workers.

Christy Hoffman, UNI General Secretary and Rajendra Acharya, UNI Apro Regional Secretary joining the proceedings virtually from Nyon, Switzerland and Kathmandu, Nepal respectively, both thanked UNI-LCJ for their unwavering support to UNI and UNI Apro. A common theme in their speeches touched on the need to reflect and build upon the lessons from the difficult past year to look forward with hope when building back better a global and regional union movement in a post-COVID-19 scenario. 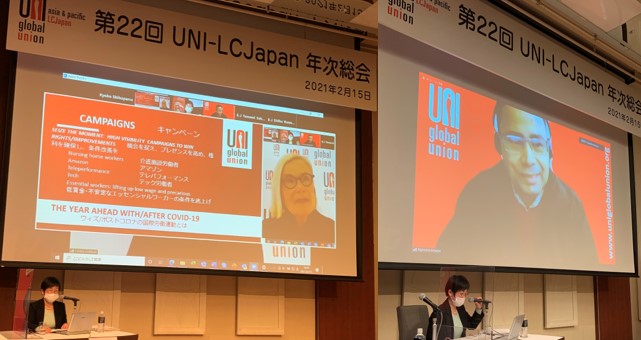 Christy reflected that recent developments could inspire confidence. This includes the election of President Biden, and Vice President Harris – being the first-ever woman to hold the post – in the U.S, and the unprecedented forming of the Alpha Union by tech workers in Google. Laying out the plans for 2021, UNI would continue to campaign for Essential Workers to improve their wages and conditions, and using its deepened digital organising skills to organize workers. It will also focus more deeply on the two major trends that accelerated during the pandemic, i.e., “remote work and “restructuring”. UNI would hold corporations accountable through mandatory human rights due diligence, the OECD guidelines, and investor/capital strategies. Christy emphasized that UNI and the whole global union movement would, in close cooperation with UNI Apro, continue to stand with unions and people in countries such as Myanmar, the Philippines and Hong Kong, to stand against attacks on democracy and human rights.

Rajendra expressed his heartfelt appreciation for the Japanese affiliates and leaders for their active support in the campaign to encourage the workers who are facing difficult situations in other parts of the Asia and Pacific region. He reiterated his determination of fulfilling the vision of a ONE UNI Apro team working together to overcome the challenges of the pandemic and to actively propagate the collaborative labour-union-government relationships to build back better.

The annual affair closed with UNI Apro President Minao Noda, who is also the elected Vice-Chairperson of UNI LCJ,  encouraging all participants to continue to promote constructive industrial relations, to support Rajendra as the UNI Apro Regional Secretary, and to work vigorously together to build back better under the new leadership of Bro. Matsuura, Chairperson, Sis. Morikawa, Executive Secretary and Bro. Ueda, Assistant Executive Secretary of UNI-LCJ.