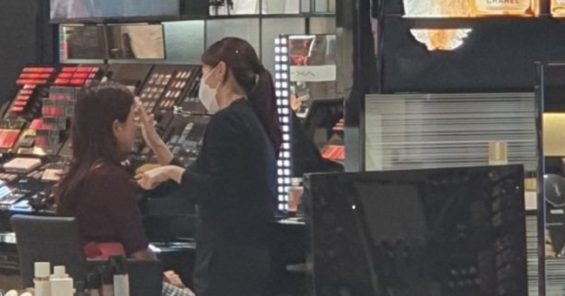 Travel restrictions due to COVID-19 has hit the tourism related industries the hardest. Airlines and airports everywhere are seeing much lesser passengers. Korea is no exception which saw declining sales in airport duty free shops. It has forced companies to re-look into their operations with implications on job security for workers.

Recently, the KFSU-Chanel Korea Workers Union intensified its organizing outreach to workers in Chanel’s duty-free airport shops. They found that duty-free shop workers were forcibly deployed as sales counter staff at department stores or even warehouses since May.

Chanel is a century old brand name in the world of high fashion. Established in France and now headquartered in London with worldwide presence. Chanel Korea was launched in Korea in October 1991 and made profitable gains over the years through 13 duty free shops in the airports and stores located in Seoul and other major cities. The working conditions and wage level remained poor until a union was established in August 2004.

Sister Kim So-Yeon, President of Chanel Korea Workers Union pointed out that the collective agreement provided for the management to discuss with the union and to give 3 weeks’ notice to workers who will be transferred. She said the company must consider the suitability and training of workers in the duty-free shops before being deployed to department stores. However, this has not been properly fulfilled.

The union also raised concerns about the make-up services the company promoted in its marketing letter to member customers. The union told the management about the risk to workers’ health and safety in meetings in September. However, the company’s unsatisfactory reply puts the onus on the customer to request for sanitizer, disposable gloves and temperature check. This increases the risk of workers contracting Covid-19 when providing service to un-masked customers.

The union is worried that Chanel Korea is increasingly hostile towards them as new union members had been asked by the management whether they joined the union. The KFSU says this is undermining the freedom of association and the company must stop intervening in workers’ decision to join the union.

According to Maeil Labor News reporting, the workers in Chanel Korea shared their difficulties in coping with the management’s personnel transfer decisions. On top of facing hefty salary reduction of 20-40% due to loss of sales incentives, they were also frequently transferred to different cities working for just 2-4 days at a time before being transferred to another location. All expenses such as lodging and travel costs incurred with the frequent moves were initially not supported by the company until the union intervened when more duty-free workers joined as members. Workers also suffered injuries when they were sent to work in warehouses with little prior training to work in a logistics environment.

Alice Chang, UNI Apro Commerce Director, said, “Chanel is an internationally renowned brand and Chanel Korea should hold itself to higher standards. The pandemic should not be held as an excuse for illogical human resource policies.”

UNI Apro Regional Secretary, Rajendra Acharya agrees and said, “The pandemic has exposed in many places that no single stakeholder can solve the problems alone. The management should work together with the union to come out with the best solutions. The union can play a constructive role with its deep understanding of the workplace conditions and skillset of the workers.”