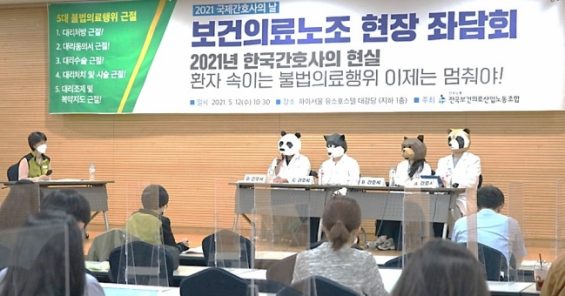 The shortage of medical staff in Korean hospitals is not a new issue, but the pandemic had heightened the pressures and problems associated with it.

One key problem plaguing the South Korean medical system is the growing use of Physician Assistants (PA) in hospitals. PAs are often trained nurses and work alongside doctors to provide patient care and medical support.

However, a continuing shortage of doctors—especially residents—in some specialised departments like surgery has caused hospitals to increasingly load PAs with tasks that licensed doctors should perform—including writing medical records, lesion suturing, prescription and treatment. Often, these nurses are often mistaken as doctors when interacting with the patients.

Such activities are illegal in Korea since the nurses are not licensed nor trained to perform them. Even so, a number of hospitals have adopted this practice.

Despite attention and investigations in the over-use of PAs in the Korean medical system, there has been no improvement on this issue in recent years.

To bring the issue back into the public light, UNI affiliate, the Korean Health and Medical Workers’ Union (KHMU) held a forum on International Nurses Day on May 12 that featured four PAs – two nurses and two critical care nurses – who shared their stories.

One PA described the illegal medical care they provide as the same as a child driving without a driver’s license. Another PA admitted that they are operating in a grey zone as people who do not officially appear on any record. They have to take extra precautions to not leave any trace of them performing a doctor’s work.

The KHMU surveyed 1,689 nurses across 26 national and private university hospitals in April 2021. The results revealed that the nurses reported a 68% increase in physician work and general ward nurses also represented physicians during 37% of their working time.

KHMU President Na Sun-Ja declared, “The nurses working as PA are under tremendous stress and face constant anxiety over the potential consequences. This is obviously an illegal practice and must be eliminated immediately for the safety of patients as well as nurses.”

The union estimated that there are about 10,000 PA nurses across the country who are performing a doctor’s duties due to a lack of doctors. The KHMU is demanding the hospitals to hire a sufficient number of medical doctors and to protect patients from the danger of illegal medical practices.

Adrian Durtschi, Head of UNICARE pointed out, “What the hospitals are doing is a form of salary dumping. Nurses already earn way less and are being forced to do the tasks of doctors for less money.”

UNI Apro Regional Secretary Rajendra Acharya expressed concern over the legal implications, he said, “Since the PA system is not currently practiced or regulated in Korea, the nurses are being exposed to legal consequences should any problem arise with the patients in the course of any medical treatment or procedures. UNI Apro stands with KHMU in eliminating any such legal risks to nurses.”