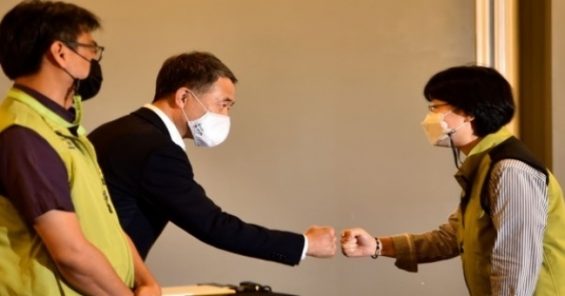 UNI affiliate, the Korea Health & Medical Workers’ Union (KHMU), urged the Korean government to stand firm and not renege on its plans to strengthen the country’s public medical service.

The union held a press conference last week in front of the National Assembly building to denounce the government’s caving to the demands of the medical doctor associations to scrap the health reform plans announced earlier in July.

KHMU President Na Sun-Ja met the Minister of Health and Welfare on the same day to convey the union’s position. She urged the government to establish a special body that involves all stakeholders, including the Korean public, to develop a consensus on moving forward with the now-halted reform plans.

She emphasized that two key areas need to be addressed, the increase of medical students in national and public medical schools, and the expansion of the government’s budget to strengthen public medical organisations.

The COVID-19 pandemic has exposed and exacerbated the strain that healthcare workers are facing with current staffing level. President Na pointed out that a shortage of doctors has forced many nurses to perform work that should legally be performed by medical doctors. This undermine medical ethics and possibly have legal implications.

UNI Apro Regional Secretary, Rajendra Acharya said, “We fully support KHMU’s proposal for the government to convene a social dialogue platform. The different concerns from all sides, including those held by the doctors should be heard. The concerns raised by KHMU are very legitimate and have long term implications on the state of public healthcare services for Korea in the coming future.”

Adrian Durtschi, Head of UNICare, agrees and said, “KHMU’s aim is strengthening the public health and medical care service level. Korea currently have many profit oriented private hospitals. The COVID-19 pandemic is causing the Korean government to recognize the importance of public health and to redress this gap by training more medical students. This would put Korea in a better position for future public health challenges and also reduce the rural-urban healthcare provision gap.

“We at UNICare fully support KHMU’s position to demand the government to keep the door open for further discussion which must include our unions, patients’ association, civic society, medical experts, and nurses’ association.”

The Korean government announced plans in July to boost the admission quotas to medical schools over the next ten years. A key intention of the policy reform is to increase the number of doctors available in rural areas, and the number of specialists in less popular specialities such as epidemiology.

The plans received support from KHMU and were well-received by the general public according to opinion polls. However, it attracted opposition from current medical doctors, medical residents and students in training. Strikes, protests, and walkouts were initiated by the medical associations in August. This forced major hospitals to reduce working hours or delay procedures and thousands of medical facilities had to close.

Worries over a resurgence in COVID-19 cases in the country saw the ruling party reached an agreement with a group of doctors to end the actions in early September. In return, the government agreed to suspend the reform plans.