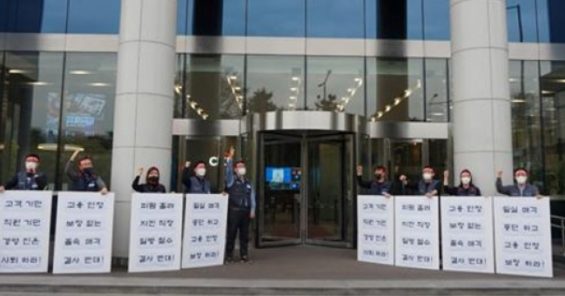 Citibank’s recent announcement of disposing its retail operations in the Asia Pacific region came as a rude shock to many.

The new Citibank CEO, Jane Fraser, announced a new global strategy which will wind up its retail business in 13 countries. The majority are in Asia – South Korea, India, Indonesia, China, Australia, Thailand, Malaysia, the Philippines, Taiwan, and Vietnam, with the others in Bahrain, Russa and Poland.

In Korea, the news dropped like a bombshell which disrupted the KFIU-Citibank Workers’ Union’s ongoing negotiation of the 2020 wage and Collective Bargaining Agreement with the Citibank Korea Management.

Bro Jin Chang-Keun, KFIU-Citibank Workers Union President criticised the way the bank handled the announcement, saying, “The news came without warning. What’s worse was that the management even denied the fact on the day the news broke in the media”.

“It was a disastrous handling with no coordination resulting in a bank-run among many Korean account holders rushing to withdraw their deposits”, he added.

The union staged a picket in front of the Citibank head office in Seoul on April 19 demanding the sales plan to be rescinded.

According to the union, Citibank Korea had been closing branches over the last 10 years. From 221 branches in 2011, the bank closed 57 branches in 2014 and 89 branches in 2017. Now only 39 branches are left. Even so, the Korean operations in the same period had contributed W2.9 trillion (approx. US$2.6 billion) of revenue to the head office.

Citibank Korea employs nearly 3,500 workers as of March 2021. Many local civic society, academic circles and labour experts expressed worries on the impact to the labour market if Citibank’s exit proceeds without a full dialogue with the union.

Bro Park Hong-Bae, KFIU President says, “Closing the retail business in Korea will affect at least 2,500 workers including 940 workers in the branches. Given the thousands of people involved, we call on the Finance Supervisory Commission as a regulatory body and the Ministry of Employment and Labor to look into the Citibank management’s business practices affecting workers’ rights”.

Rajendra pledged UNI Apro’s solidarity with the union, “We will definitely support their efforts to press the Citibank Korea management to enter into a dialogue to mitigate the impact on the workers”.

Priyalal added, “What is concerning is that the majority of the countries affected by Citibank’s pull-out are in Asia. This unwelcomed news add more pressure to bank workers during a time of economic uncertainty during the pandemic”.

Angelo Di Cristo, Head of Finance Sector at the UNI Global Union, said that UNI is paying attention to the news and will work closely with UNI Apro to support affiliates in the region affected by Citibank’s decision.