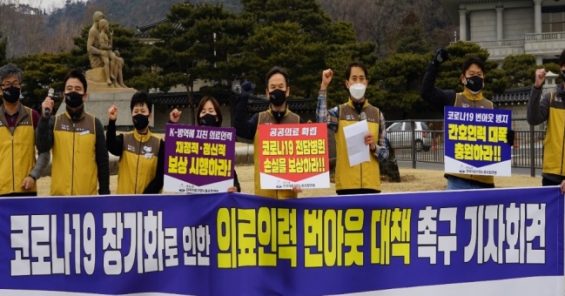 On 21 January, the Federation of Korea Medical Industry Trade Unions (FKMTU) held a press conference in front of the President’s Office demanding the government to address the needs of frontline medical workers who are exhausted after nearly one year of battling the COVID-19 pandemic.

Korea saw a third wave of infections in recent months. Health officials said in early January that the resurgence was being contained due to tougher restrictions during the New Year holiday season. However, this was achieved on the backs of medical workers working tirelessly to manage the cases. As a result, many workers are now at risk of burning out.

Brother Shin Seung-Il, FKMTU President said, “We are disappointed that the government has not fully responded to our calls over the months to increase the workforce. Medical workers and doctors are physically and mentally burning out now. They are pushing beyond their limits to cope with the demands to deal with the pandemic.”

The union has been calling for an increase to the regular medical workforce and for the hospitals mobilized to fight the pandemic to be compensated financially. It is also calling for the medical staff to receive special payments in recognition of their sacrifice.

When the third wave of infections hit, the government hastily recruited temporary workforce to staff the COVID testing centres and issued administrative orders to occupy beds in the national university hospitals.

This move helped mitigate the surge in cases but problems were created during the process.  This included unfairness in the wage and compensation between the existing workers and newly recruited temporary workers who sometimes are lack of experiences and skills.

Union members working at the front lines reported that nurses and medical staff are under immense strain due to heavy workload with no time for rest or leave. PPEs were in short supply and not made available to those recruited temporarily for allied work.

Sister Choi Young-Mi, Vice President of FKTMU pointed out that the hospitals mobilized are facing financial difficulties to sustain the operations. Whatever financial support previously pledged by the government were not fully forthcoming. Many workers are suffering the consequences in the form of delayed wage payment.

UNI Apro Regional Secretary, Rajendra Acharya said, “Korea has been one of the few leading examples of how to manage the pandemic in Asia. It is concerning that reports from the ground reveal the gap between what was promised and how it was actually implemented.

“The government should try its best to increase the regular medical workforce and ensure that they are fairly treated in view of the sacrifice they are making. It should also ensure that appropriate training and adequate protection is provided for the temporary workforce recruited for the allied health work.”