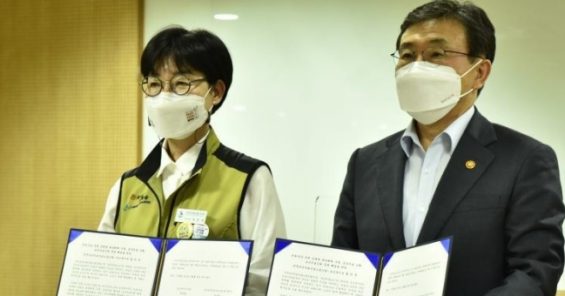 UNI Global Union affiliate, the Korean Health & Medical Workers’ Union (KHMU), scored a victory in the early hours of 2 September when the union broke through the final deadlock in the negotiations with the Ministry of Health and Welfare (MOHW) in their 13th round of talks.

Failed talks would have resulted in a nationwide strike involving tens of thousands of KHMU’s members.

The dramatic turnaround came about when the majority of the 246 registered delegates voted after an intense three-hour discussion online to accept the concessions offered by the government.

The union has been engaged in intensive talks with the government since May 2021 to address the deteriorating working conditions faced by healthcare workers during the pandemic.

The agreement addresses the significant calls for improvement put forward by the KHMU, including measures to:

Head of UNI Care, Adrian Durtschi, conveyed his congratulations to KHMU President Na Sun-ja and her fellow members, saying, “I am delighted with this result. Your hard work paid off. Every member of KHMU should be proud of this achievement, which will bring hope to all healthcare workers on the frontline.”

UNI Asia and Pacific Regional Secretary Rajendra Acharya said, “Congratulations to KHMU! And thank you for showing us such a great example of a union winning to protect not just healthcare workers but also people receiving your care. Sincere and unwavering dialogue can work, and I hope it inspires other unions too!”