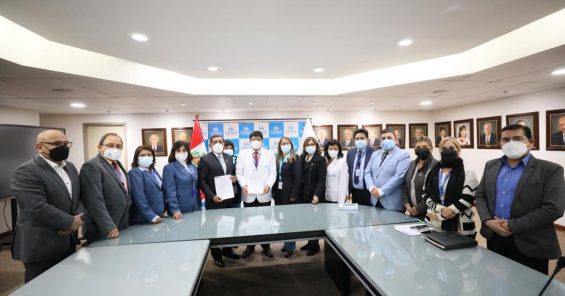 Working together in the coalition “Unidad de Gremios de ESSALUD,” unions from ESSALUD, the Peruvian Social Security Health Provider, have made their mark by signing a collective agreement for all employees of social security system on May 2022. The agreement was achieved thanks to the conviction and joint pressure of the sector unions: Fed-Cut, Sinesss, Sinatemss, Sinaps and Suness.

For the unions, it was a significant victory to win a wage increase for the public health sector, something that had not happened since 2018. They had been fighting for the pay rise even though, at the time of the agreement, there was no law that allowed for negotiations for public sector workers. It was only in June this year that the government rectified this situation through a law centralizing collective bargaining for public sector workers.

“This is the product of the effective work and unity of all unions, understanding that the only way to achieve dignity, respect and gains is through working together,” said Wilfredo Ponce, General Secretary of FED-CUT. “We welcome this agreement, which also contributes to the strengthening of the trade union organizations themselves and their struggle in Peru,” he added.

Under the terms of the two-year agreement, which starts on January  2023, ESSALUD commits to implement an increase across its the salary scale. Giovanna Aybar, General Secretary of the ESSALUD Psychologists’ Union, added: “It shows once again that by being united the different unions generate a union force achieving objectives that revalue the work of the different professionals and technical staff of our institution.”

“It only remains for us to continue working together for the fulfilment of all the points of the collective agreement of economic nature and the points of working conditions, a challenge for each of the leaders and affiliates of the union of nutritionists of ESSALUD. We feel very confident because we have the logistical support and advice of our global trade union federation, UNI Americas,” said María del Pilar Arévalo, General Secretary of the National Unitary Union of Nutritionists, SUNESS / ESSALUD.

This worker victory in Peru shows that unity in union work is the engine of change to achieve equal rights and respect for all health workers.

“The alliance of ESSALUD unions is a demonstration of the power of unity. They achieved this historic victory by coordinating, working, and taking action collectively. It is an example to unions worldwide of what we can achieve when we are united,” said Alan Sable, Director of UNI Americas’ Care sector.

UNI Americas celebrates this victory, and all steps that the unions who participated in negotiation took to make it possible.