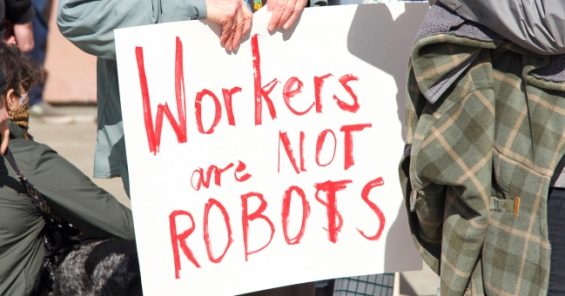 As scrutiny over Amazon body-breaking business model increases, the California Senate passed last night a new law that would clamp down on production quotas for warehouse workers, forcing Amazon to disclose to workers and regulators the production quotas they are required to meet.

“With this law California is leading the way in regulating the brave new world of work where companies like Amazon are allowed to impose their intrusive and all-encompassing production systems that has pernicious effects on the health of millions of workers,” said Christy Hoffman, General Secretary of UNI Global Union. “It’s time to dismantle the Amazon panopticon that breaks workers bodies and ultimately forces them to quit.”

“This is a historic victory for workers at Amazon and other major warehouse companies,” Ron Herrera, a Teamsters official who is president of the Los Angeles County Federation of Labour, said in a statement.

Scanners, cameras, private investigators, and other methods not only pressure Amazon employees to work faster. With its unrealistic and body-breaking productivity goals, and intrusive employee surveillance, Amazon treats workers as disposable items. And now we know that Amazon’s staggeringly high worker turnover is not a flaw of the system—it’s the system.

According to UNI’s new report The Amazon Panopticon, “Amazon facilities have industry-leading injury rates, and workers around the world report stress and anxiety as the rhythms of work required by the company force them to avoid hydrating to reduce bathroom breaks, pee in bottles, and take unsafe shortcuts. Widespread precarity in the company’s warehouses and delivery networks makes many employees even more vulnerable to surveillance as they strive to get their next contract renewal.”

“In every step of the process workers are constantly watched, recorded, and their labour measured,” said Alessandro Delfanti, Associate Professor at the University of Toronto and one of the authors of the report. “The oceans of data Amazon collects about its workers—their productivity rates, location, driving habits, and personal opinions, among others—provide the company with unparalleled amounts of information. Amazon uses it to control workers. Among other effects, the power Amazon derives from this surveillance can undermine attempts by workers to unionize to improve their working conditions.”