London Grosvenor Casino workers to walk out for a fair wage 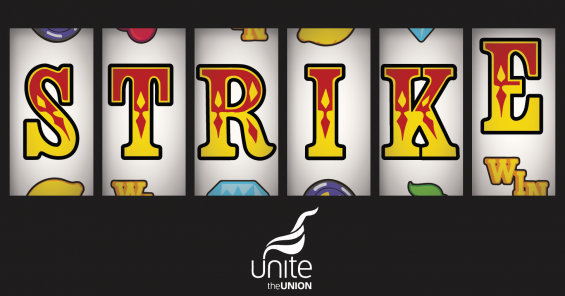 Casinos across London may be forced to close this weekend as workers, all members of UNI affiliate Unite the union, take action to win a fair wage.

Around 150 workers throughout Grosvenor Casinos’ seven venues across the capital have voted by an overwhelming 91 per cent to reject retention bonus payments of £600 and £800 as totally inadequate amid a grave and growing cost-of-living crisis.

The workers are mainly croupiers and dealers, but also include food and beverage waiting and kitchen staff.

Unite says that Grosvenor Casinos, part of the huge Rank Group, which has returned £74 million in profits so far this year, can easily afford a more realistic offer to the workers.

Sharon Graham, Unite general secretary, said: “Here we go again: Grosvenor Casinos is another big money company that is raking it in but refusing to pay its workers a wage that they can live on. It’s just not acceptable and this huge vote for action underscores the sense of anger across this workforce.

“Our members at Grosvenor Casinos will have Unite’s full backing in this fight for a fair deal.”

The union is seeking a pay offer which reflects spiralling living costs, which are currently running at over 12 per cent and set to go still higher.

Unite’s national officer for the hospitality sector, Dave Turnbull, added: “Grosvenor Casinos need to understand that this workforce is united, and more workers are joining Unite every day.

“London is one of the most expensive cities on earth for workers to survive in, which is why the message from the members could not be clearer: Only a substantial uplift in pay will do.

Giedre Lelyte, UNI Global Union’s Head of Gaming said, “We stand in full support with Grosvenor workers and Unite members who are standing up for a fair deal at work. Workers need a decent wage to keep up with the growing cost-of-living crisis and should not be struggling to make ends meet whilst the company takes in massive profits.”

The strikes will commence at 06:00 hours on Friday 9 September and run through until 06:00 hours on Monday 12 September, hitting the following Grosvenor venues: The Victoria, The Rialto, The Gloucester, The Park Tower, The Golden Horseshoe, The St Giles and The Barracuda.

The Rank Group, which includes Mecca Bingo and Grosvenor Casinos, recorded a pre-tax profit of £74.3 million in June this year.

This comes as part of a wave of strikes sweeping the UK as workers step up to protest years of stagnant pay amidst soaring prices and an escalating cost-of-living crisis. Rail, media, postal and ICTS workers have all been on strike this summer for fair wages, with teachers, doctors and nurses set to vote on industrial action in the next few weeks