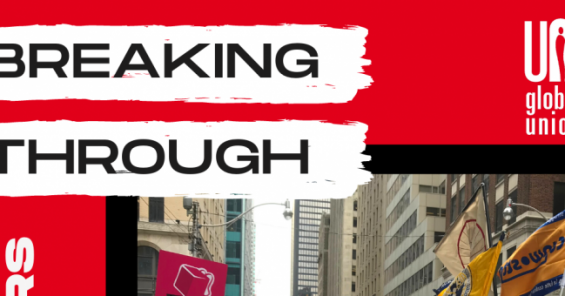 UNI Global Union has honoured the Canadian Union of Postal Workers (CUPW) with a Breaking Through Award in recognition of their historic wins for the labour movement and gig economy in Canada.

Their Justice for Foodora Couriers campaign resulted in the first union vote for gig workers in Canada and a precedent-setting ruling by the Ontario Labour Relations Board that couriers are dependent contractors and have the right to unionize.

“This award highlights that strategic and creative organizing drives are necessary to unionize the gig economy.  CUPW is honoured to stand with the foodsters and support them and all other gig workers in the struggles to come.”

CUPW employed innovative and community-based tactics to organize Foodora couriers, whose job delivering meals to customers across the city of Toronto meant they had no fixed workplace and little contact with one other. The union trained teams of street outreach couriers to engage with other foodsters with the aim of making them interested in joining a union meeting. CUPW also held a series of targeted workshops to attract more workers.

The union launched a highly successful public-facing campaign on May Day in 2019, which included rallies, events and ads, while also building an online presence. This increased visibility and helped to boost numbers. It also pushed the public to join in solidarity with the workers and win the public debate in Canada on the rights of gig economy workers to unionize. The media was equally drawn to the campaign, and the Toronto Star released a six-part podcast series about the foodora couriers.

“CUPW’s massive win for foodora couriers has opened the door for organizing app-based workers in Canada and afforded much needed rights to people working in the gig economy. Congratulations to everyone involved in this ground-breaking campaign.”

UNI’s Breaking Through Awards recognize unions who have built strength through innovative organizing campaigns in the face of adversity. The other winners this year include the SDA in Australia, HK Privat in Denmark and HSWU in Ghana.