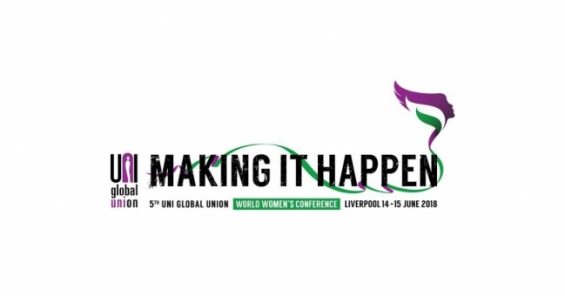 The UNI Women’s Conference will bring together almost 700 top union leaders from all over the world. 2018 is a year of milestones – chief among them the centenary of the Suffragette movement in the UK. The Conference will take place 14-15 June at the ACC Centre in Liverpool.

The Suffragette movement was led by courageous women such as the Pankhursts and the UNI Women’s Conference will be looking to build on their legacy by celebrating Powerful Women as the overarching theme of the Conference.  Other themes include Violence against women, UNI Mentoring Program, Gender Equality rule in UNI and The Future World of Work and its impact on women workers.

The Conference will see Dr. Rebecca Johnson of the Nobel-Prize-winning International Campaign for the Abolition of Nuclear Weapons rewarded with UNI’s Freedom from Fear Award.

“Unions have been a pillar of the peace movement throughout our 150-year history,” said the UNI World President Ann Selin. “We have been a steadfast supporter of ICAN and the IPB and were delighted when they received the Nobel Peace Prize this year.”

Head of UNI Equal Opportunities Veronica Fernandez-Mendez said, “Our message is clear – if you believe that all humans should be equal, you are a feminist. Nobody should be afraid to be who and what they want to be or feel discriminated against due to their gender. We need more women in the decision-making structures of our unions in order to tackle the challenges posed by sexual harassment, gender discrimination and violence at work.”