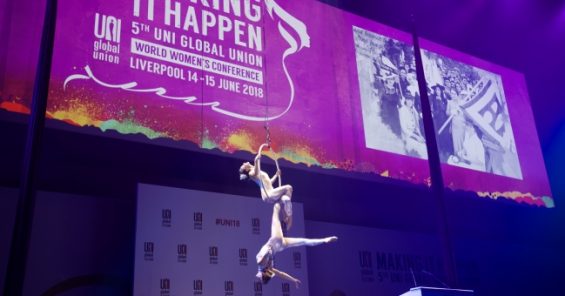 The conference was kicked off by performances from Nicole Pearson and Elena Marina, two female performance artists showcasing the best of Liverpudlian talent.

Jane Loftus, President of the CWU in the UK, gave a rousing opening speech touching on the crucial importance of female activists and trade unionists for the social justice movement. Loftus spoke on the history of trade unionism in Liverpool and remembered recent working-class tragedies such the Hillsborough disaster and the Grenfell Tower fire, which had its first anniversary today. Loftus finished her speech celebrating the successful Irish abortion referendum with a chanting of “Can we make it happen? Yes we can!”

Christy Hoffman, Deputy Secretary General of UNI Global Union, and nominee to be its first female General Secretary, raised the issue of sexual harassment and how unions can come together to fight against it. UNI has been working for ten years on its Breaking the Circle campaign, which aims to eradicate sexual harassment and violence, and has been lobbying hard for the ILO Convention of eradicating workplace violence.

Ann Selin, in her final address as President of UNI Global Union, announced that she would be stepping down, a legacy that will be very much missed. Selin also presented a Freedom from Fear Award to Dr Rebecca Johnson from ICAN, the 2017 Nobel peace Prize winners, and a long time feminist peace campaigner with expertise on nuclear issues. Dr Johnson gave an impassioned speech on eradicating not only nuclear weapons, but also sexual violence, from our society stating “there cannot be peace as long as women are threatened by violence.”

Denise McGuire, UNI Women’s President for over ten years, dedicated her speech to all the powerful and inspiring women in trade unions and around the world. Wrapping up the ceremony, McGuire captured the fervour by stating: “women can do anything, women can be anything, women can change the world.”