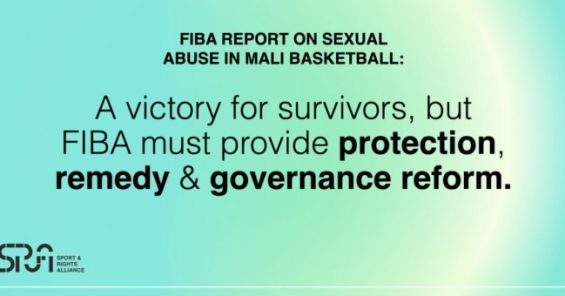 The International Basketball Federation’s (FIBA)  report on systemic sexual harassment and abuse within the Mali Basketball Federation (FMBB) vindicates the victims of abuse,  survivors, whistleblowers, and  activists who took enormous risks to bring this abuse to light, the Sport & Rights Alliance said today.

In July, Malian authorities arrested and indicted Amadou Bamba, the head coach of Mali’s Under-18 women’s national basketball team, who is awaiting trial for “pedophilia, attempted rape, and molestation.” FIBA suspended the FMBB president, Harouna Maiga, for impeding the investigation and covering up sexual abuse.

Critical gaps remain in the approach that the McLaren independent investigation team took, notably with respect to confidentiality, trauma support, and witness protection, the Sport & Rights Alliance said. Since the start of the investigation, a survivor-centered approach and trauma-informed process has been dangerously absent.

The report highlights that 22 survivors were intimidated by basketball federation officials or others and decided not to give evidence to McLaren. Those who agreed to be interviewed also reported that they were afraid of retaliation. One player reported that the Mali federation directly retaliated by removing her from the World Cup national team roster after she and her family reported sexual abuse.

All institutions with jurisdiction over the issue, including the Malian justice system, the Malian Ministry of Youth and Sport, the Mali Basketball Federation, and FIBA, should investigate the abuses and cover-up documented in the McLaren report. The Youth and Sport Ministry should form a government commission of inquiry to impartially investigate systemic sexual abuse in girls’ basketball and other girls’ sports in Mali. The ministry should also act to ensure that players do not face retaliation for making complaints, and work with women’s rights and healthcare providers with expertise in sexual abuse and trauma so that survivors have access to long-term, quality support services.

“FIBA and the McLaren team’s lack of protection systems exposed survivors and witnesses to great risk, and likely made possible the extensive intimidation and retaliation by federation leaders detailed by the report,” said Julie Ann Rivers-Cochran, executive director of The Army of Survivors, an advocacy organization led by former athletes and survivors working to end the systemic culture of sexual abuse across the world of sport. “FIBA has yet to apologize for failing to protect Mali’s female players from sexual abuse for many years or provide remedies, such as compensation, trauma support, and playing opportunities to these brave young female athletes.”

The failures in the McLaren investigation’s protection measures are symptomatic of foundational flaws in FIBA’s governance, structure and responsibilities to basketball players. The report states that in 2012 basketball players who tried to create a union in Mali were threatened by officials that they would not be selected for the national team. In many countries, unions that represent athletes can bring sexual assault complaints that protect them and let them give evidence safely.

“The success of global basketball depends on respect and protection for athletes, which include women and girls,” said Terri Jackson, executive director of the Women’s National Basketball Players Association. “As the world basketball governing body, FIBA is responsible for players’ justice, accountability and protection. FIBA needs to respect players’ rights to organize without fear of discrimination, and provide for their safety and participation in decision-making at the highest level.”

As a recent statement by FIBA reveals, FIBA President Hamane Niang was given the choice to resume his official duties despite the absence of an effective child safeguarding mechanism during his time as Mali Basketball Federation president from 1999 to 2007. The FIBA report also concludes there was no meaningful reporting mechanism for players to report sexual abuse, and that when they did, responsible officials covered it up, allowing abuse to continue.

“The FIBA report’s conclusion that the child safeguarding and reporting mechanisms present within the Mali Basketball Federation are ‘wholly insufficient’ means that survivors, victims of abuse, and whistleblowers were not and are still not protected up to this moment,” said Andrea Florence, acting director of the Sport & Rights Alliance. “This requires urgent corrective action from FIBA and the Mali government.”

The Sport & Rights Alliance calls for further action and answers from FIBA, including:

In August, the Mali Women’s Under-19 team became the first African team to reach the final four of the FIBA U19 Basketball World Cup.

“Despite trauma from exposing systemic sexual abuse in their national basketball federation and the indictment of their head coach, the Under-19 Mali women’s team made history,” Jackson said.  “These courageous players deserve an apology, support and opportunity to recover their joy in the game.”