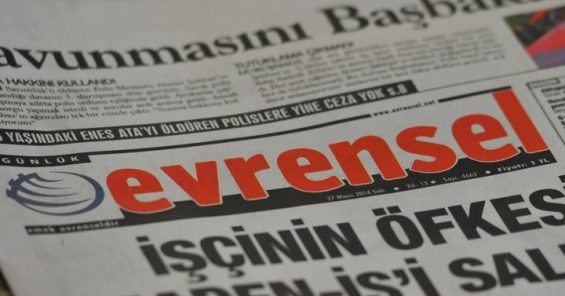 The media, entertainment and arts unions affiliated to UNI Global Union, representing more than 500,000 workers, stand in solidarity with Turkish journalists’ union, TGS, and colleagues at the Turkish daily newspaper, Evrensel. The newspaper workers are under threat after the Turkish Press Advertising Agency, BİK, banned all public announcements and advertisements with the independent newspaper on 22 August, cutting off a vital source of revenue.

BİK, a state agency, is responsible for the distribution of government adverts to Turkish newspapers and regulates all advertising including commercial adverts. It has also the power to sanction newspapers in case of illegal practices.

In September 2019, the Agency suspended Evrensel’s right to publish government adverts and with the latest decision, BİK has put a permanent public advertising ban on the newspaper. In a notice sent to Evrensel, BİK said that the move was made on the grounds of alleged bulk buying that inflated circulation figures. However, BİK’s actions are part of an established practice that can be traced back to civic protests against President Erdogan’s government in 2013, and are aimed at punishing critical voices such as Evrensel and cut their financial means.

Several press freedom organizations have repeatedly called on BİK to withdraw the initial temporary public ad embargo initiated in September 2019 as well as this latest permanent ban. On 10 August 2022, the Turkish Constitutional Court ruled that BİK’s arbitrary and consecutive public advertisement bans on several newspapers, including Evrensel, violated freedom of expression and press freedom. The court ruling noted that the bans constituted evidence of BİK acting as a tool for systematic censorship and criminalization of news coverage. Emphasising that the freedom of expression of the press has been violated, the Constitutional Court also stated that “the decisions of the Press Advertisement Agency have gone beyond the purpose of regulation and turned into a means of punishment that may have a deterrent effect on some members of the press and this situation has caused a systematic problem.”

“We are deeply concerned with the impact of BİK’s behaviour on media freedom and the freedom of expression in Turkey. Evrensel has the right to finance its operations by advertising and needs access to the ad market to ensure its financial and political independence.  We call on BİK to revoke its decision to ban Evrensel from publishing official announcements and advertisements.”