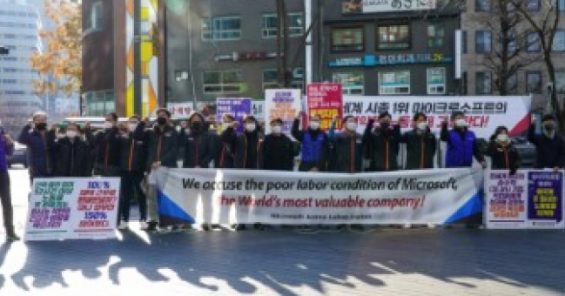 On 24 November, more than 90 per cent of the Microsoft Korea Workers Union membership voted to strike in response to inadequate pay and deteriorating conditions. The union represents 450 workers employed as technicians, researchers, developers, software and customer support engineers.

Through long hours and hard work, South Korean Microsoft workers have helped the company grow to be one of the most valuable in the world—it recorded a 47 per cent year-over-year jump in profits in 2021.

However despite this success, Microsoft Korea is reportedly only offering a meagre 3.5 per cent wage increase, which is less than half of the expected industry average of 8 per cent and would be mostly eaten up by inflation.

Brother Lee Ok-Hyoung, President of Microsoft Korea Workers’ Union said, “Microsoft Korea made a lot of money during the pandemic, and most of its profit came on the backs of the IT workers, many of whom were working from home since April 2020.

“Over half of the Microsoft Korea workforce are working long hours – more than 52 hours per week. And many more are raising the alarm about increasing work hours.

“The union conducted over 37 rounds of negotiations with the company alone this year. We are just asking the company to  give the IT workers fair compensation in recognition of their sacrifice, and to hire more people to alleviate the long working hours that are growing by the day.”