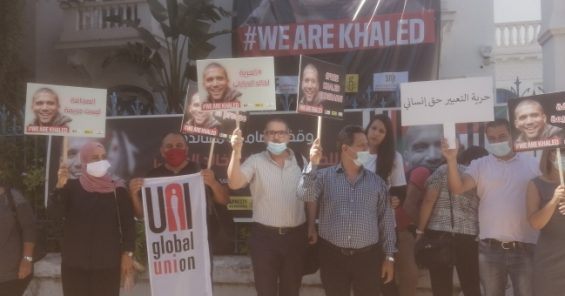 Journalists at Morocco-based Médi1TV, one of the largest pan-Arabic broadcasters, are under fire for their union-supported protests calling for stronger Covid-19 protections.

One journalist, a staff representative in the union, was fired without any clear reason other than his union activist. Additionally, management has demoted two other union representatives and activists.

These unjust disciplinary actions seem to be a retaliation against the union, as the staff of Médi1TV recently protested against insufficient safety measures in response to the pandemic; against the lack of social dialogue at Médi1TV; and against the unilateral decisions by the management to close a site and transfer employees without taking into consideration their social and family situations. The management did not consult the works council, nor the staff union.

“Freedom of association in the newsroom helps ensure a fair and democratic press,” said Keith Jacobs, Regional Secretary of UNI Africa. “It is deeply disturbing that Médi1TV is attacking journalists’ union for simply wanting safer jobs and dialogue with management.”

UNI Global Union stands with the journalists in FENAJIC-UMT at Médi1TV and calls for the immediate reinstatement of the dismissed and demoted employees.

UNI is also calling on the Moroccan government and authorities to ensure that employees can exercise their freedom of association as guaranteed by Moroccan legislation and international conventions.