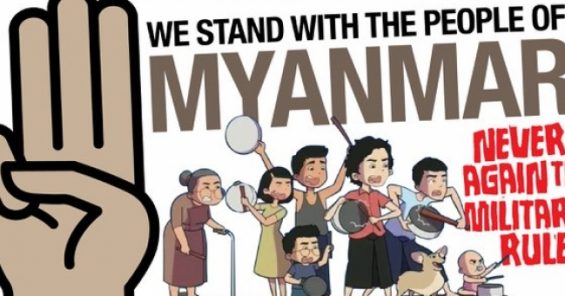 The federation of unions, representing 3 million ICTS workers worldwide, is also calling on telecoms and internet service providers (ISPs) to speak out against the law—especially the three multinational companies that dominate the market in the Southeast Asian nation: Telenor (Norway), KDDI (Japan) and Ooredoo (Qatar).

“This so-called cybersecurity bill only protects the government’s grasp on power, and it will be a powerful weapon against the trade unionists, the students, the teachers, and the broad swath of civil society speaking out,” said Christy Hoffman, General Secretary of UNI Global Union. “The international community must stand up to reject this law for what it is—an instrument of repression against pro-democracy activists, journalists, and everyday people who want to express their opinions. Telecommunications companies must also push back against this law or risk becoming a weapon of this military junta against democracy.”

The bill seeks to give the State Administrative Council, installed after a military coup earlier this month, sweeping powers to access user data, block websites, order internet shutdowns, and imprison critics and officials at noncomplying companies. The military government sent the draft to telecommunications operators  and internet service providers on February 9 and called for input on the bill by February 15.

“The people of Myanmar have been stripped of their democratically elected government, and the companies doing business in the country, democratic nations, and international institutions are obligated to help them get it back,” said Rajendra Acharya, Regional Secretary of UNI APRO. “One critical step they can take is putting human rights—and human lives—first by speaking out against this law.”

Many of the massive pro-democracy rallies were organized through social media and other online channels. The military of Myanmar has a history of brutal suppression of critics.