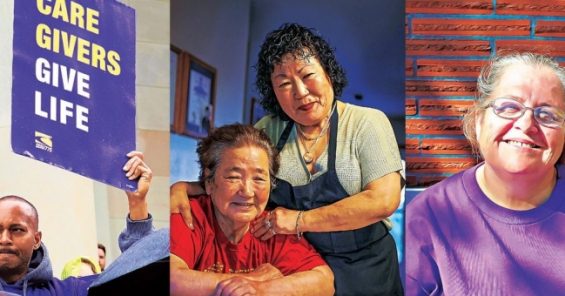 “Higher home care wages reduce economic hardship and improve recruitment and retention in one of the U.S.’s fastest-growing jobs,” according to a new report from Center for American Progress and the Seattle-based union, SEIU Local 775. The analysis illustrates the wide-ranging economic benefits of the proposed $400 billion investment in home care services and the workforce included in U.S. President Joe Biden’s American Jobs Plan.

“For years, my kids and I lived with my mom because we couldn’t afford to live anywhere else,” said Lauren Evans, a home care worker from Vancouver.” But in January of 2021, with the money from hazard pay, we were finally able to get our own place. It’s the cheapest I could find: an apartment complex for low-income tenants in a unit with just two bedrooms for the four of us. I make just enough to cover it. I dream of having enough money to give my kids their own rooms, but at least we have a home right now. If our wages drop back down, I’m scared we’ll have to move out. I’ve lived on my own in a car before, [and] I will never forget what it feels like not to have a home to go home to. That freaks me out, especially since I have kids.”

During the COVID-19 pandemic, some U.S. states used the emergency influx of federal Medicaid dollars to implement hazard pay, a significant but temporary increase in home care workers’ wages. This case study is based on in-depth interviews and a statewide survey sent to 42,000 caregivers and completed by 5,307 caregivers who received hazard pay in Washington State. It provides evidence that even a $2.50 increase in home care wages yields significant measurable improvements in caregivers’ housing and food security, access to healthcare, mental health, savings, and well-being – as well as their ability and willingness to take and stay in these critical jobs.

“With this new and insightful report, CAP and SEIU local 775 are providing key information to better understand the connection between better pay, worker retention and overall improve quality of life work home care workers,” said Adrian Durtschi, Head for Care at UNI Global Union. “Increasing pay for such a vital but vulnerable workforce is a no brainer. It’s time to give home care workers the dignity the deserve.”

The report finds that the impact of higher wages on caregivers’ economic security and well-being also translates to their ability and desire to stay in the job. Caregivers described their love for their clients and their work, but many also said they have considered quitting due to low wages.

Higher wages will help to ensure that there are enough caregivers to meet the growing demand, and that there are caregivers with enough long-term experience in the field to provide quality care. As Congress deliberates over investments in long-term economic growth, expanding access to quality, affordable home care will help hundreds of thousands of older adults and people with disabilities obtain the support they need, while also creating jobs, raising wages, and reducing economic insecurity and racial inequity.