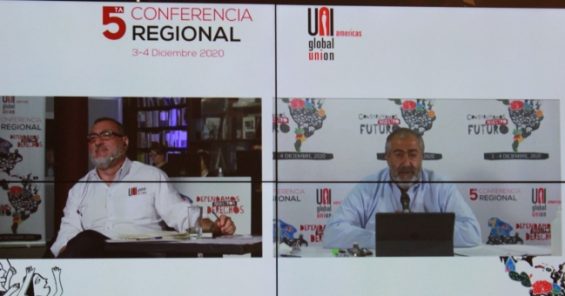 The leadership slate was put in place by more than 700 trade union leaders from 33 countries, under the slogan “Defend our Rights, Build our Future.”

“We will build a common agenda in the region because together we can overcome the enormous challenges ahead,” Monzane said. “The past four years have shown us that the unimaginable is possible, and that dramatic change can take place in a period of days or weeks—not years. This is an opportunity for us to think bigger than we ever have before, and to push employers and our communities to radically revalue the work our members do. This is our vision for the next four years.”

“We have a tremendous task ahead of us over the next four years,” said Daer. “But we know that the trade union movement is often the engine of social and economic progress. We will build a future and emerge from this pandemic stronger than ever.”

Over the past four years, UNI Americas has weathered a rise in far-right extremist governments, escalating attacks on unionists, and the devasting effects of Covid-19.

But the region, under Monzane and Daer’s leadership, has continued to build power with 62 union campaigns on the ground and the establishment of a new organizing centre in Colombia. During Covid, UNI Americas organizers rapidly adapted to using online organizing strategies to bring workers together in a time of social distancing—even forming new unions.

“With Marcio, Hector, and the new executive board in place, UNI Americas will not just be a hub of solidarity, but continue to be a source of collective worker power in the region,” said UNI General Secretary Christy Hoffman. “On the global level, we will do all we can to support the unions and workers in the Americas region to defend our rights and hold multinationals responsible through organizing and collective bargaining.”