No salary, no health: FATSA in the fight for rebuilding salaries 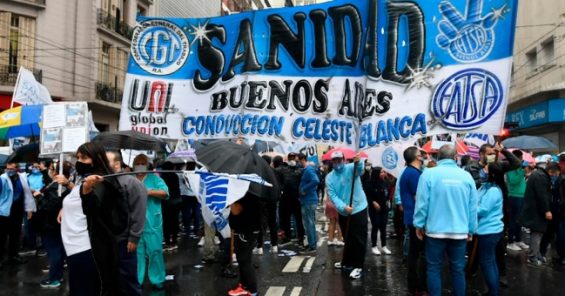 The Federation of Associations of Argentine Health Workers (FATSA), started its National Plan to rebuild the salaries of all its workers, after the companies rejected adjusting salaries in a context of high inflation, refusing to negotiate in such critical times for the Health System, and putting the citizens’ health care services at risk.

“Health workers continue to be where they are needed, as from the first day of the pandemic: taking care of the Argentine people. Today, with the same responsibility and in unity, we uphold the legitimate claim for salary adjustments” stated Héctor Dáer, President of UNI Americas. “The Health sector increased its professional training, our brothers and sisters have now more years of education, and in particular with the pandemic they have had more training and have strengthened their knowledge. We want an acknowledgment to be reflected in collective bargaining”, he concluded.

Since the beginning of the pandemic, health workers have been working tirelessly, serving all Argentines on the front line, and FATSA has been an example of trade union organization, demanding protection measures and fundamental rights for workers who have had to deal with double the tasks since this health crisis began.

The government has listened to these demands, placing Argentina among the countries that have most supported workers, showing that a good response does not depend on the wealth of a nation, but on the strength of union institutions and a true social dialogue. “Health companies also have to do their part and ensure that not even one health worker loses purchasing power; that is why we urge companies to abandon delaying actions and listen and negotiate with FATSA,” said Alan Sable, Regional Director of UNICARE Americas.

Likewise, UNI Americas prepared a statement of solidarity: “FATSA advocated to ensure adequate and safe conditions for workers in the sector, and the Argentine government responded positively to their requests to protect workers.”

“It is time for companies to do the same and recognize the huge sacrifice that workers are making every day. The health crisis continues and society needs them today, so we will not only continue to make their work visible, but will also demand that their work is recognized. We call on Argentine Healthcare employers to listen to the demands raised, put an end to intransigency and negotiate with FATSA so that the workers who have been on the front line have the response they deserve”