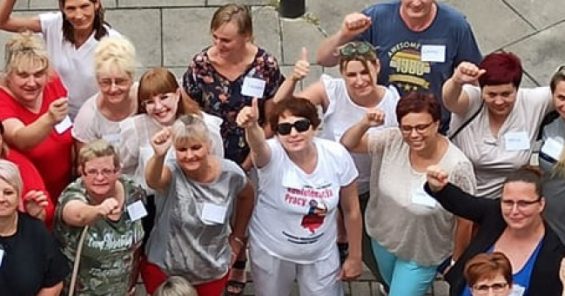 A nursing home workers’ union in Poland, affiliated to UNI Global Union through the OPZZ Konfederacja Pracy confederation, resolved to increase organizing, set up a strike fund and be a champion of women’s rights at a congress meeting on 25 June.

Some 40 worker delegates from nursing homes across Poland gathered for the Inter-Union Organization of Care Workers meeting, where they backed their union’s goals to increase membership and improve working conditions and wages throughout the care sector.

“The union for me is a reason to be proud that people are beginning to fight for their dignity, for the respect they really deserve, for decent wages so they don’t have to work beyond their limits to survive for a month,” said Joanna Szustakowska, a carer at a nursing home in Konstancin-Jeziorna.

“It is extremely encouraging when we see that workers finally recognize the need to organize. It is all the more important when they go beyond their own workplace; when the fight for their rights turns into a fight for the interests of the whole sector.”

The long-term goal of the union is to implement the demands of the petition to the Ministry of Family and Social Policy and to increase the number of staff in relation to the wards, and raise wages to the national average instead of the national minimum.

Barbara Dors, a nurse from nursing home in Lipsko, said:

“The union gave me the strength and confidence to take action in the fight for decent pay and improved working conditions not only in our nursing home, but in the whole country. Together we can change a lot for the better! This meeting with other union members only confirmed my decision to become a union member. Such meetings build community and give support and strength.”

Another activist, Małgosia Leoniuk, a caregiver at the Konstancin-Jeziorna nursing home, said: “I met wonderful colleagues that I had only seen on Zoom. Together we can make sure that our work has dignified pay. I also know that it is important to fight for our cause by standing together.”

“It is great to see what the care sector workers and their trade union OPZZ Konfederacja Pracy have achieved in less than a year since they formed,” said Adrian Durtschi, Head of UNICare at UNI Global Union. “They have built the first sectoral trade union in Poland, which is both a union that organizes and fights for women’s rights. Their victories in Toruń and Konstancin are an inspiration to care sector workers around the world.”