On International Women’s Day, UNI joins chorus of support for ex-Debenhams workers as they mark 333 days on strike 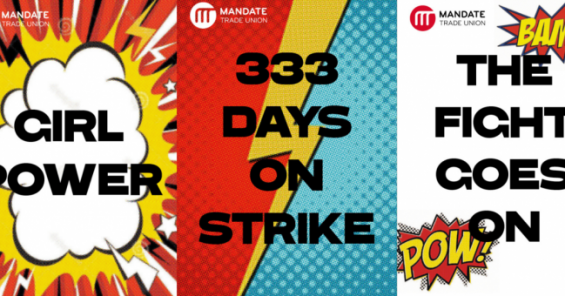 Ex-Debenhams workers, who have been on strike for 333 days today (March 8), have received messages of support from international and domestic trade unions and civil society groups on International Women’s Day 2021.

On April 9th last year Debenhams workers, the vast majority of whom are women, received an email from their employer informing them they had lost their jobs and they would not be receiving their agreed redundancy package. Since then, the workers have been on strike demanding justice and that government implement legislation to protect all workers in liquidation scenarios.

“It is completely unacceptable that nearly a year on the Debenhams workers are still left in this dire situation. And it is very concerning that the same pattern is now emerging for the Arcadia workers. In both cases, the vast majority of the workers affected by the redundancy are women who were often employed on low pay, precarious contracts. The National Women’s Council supports Mandate’s call for the long overdue change to the legislation so that workers are protected in redundancy scenarios.”

“On International Women’s Day, UNI is demanding essential rights for essential women workers. Debenhams had been making huge profits for decades on the back of their employees who were left without a job or financial security after the company was liquidated. UNI and its more than 20 million members stand firmly with the courageous retail workers in their already 300 day long campaign for a fair redundancy package and changes to legislation to ensure workers are getting their fair share in the future.”

“Today we salute former Debenhams retail workers, mainly women, who have passionately campaigned for their rights for a prolonged period. They have maintained a strong presence at picket lines across the country, though they have been exploited by a company that walked away from its obligations to loyal employees.

Congress will continue to support these women and their demands for an acceptable solution to this  protracted dispute and will work to ensure that legislation is enacted, so as this kind of situation will not arise for Irish workers in the future.”

“UFCW Local 400 members at Kroger 555 in Yorktown, Virginia stand in unwavering solidarity with ex-Debenhams workers throughout Ireland as you mark you 333rd day on the picket line. No matter where we live or who we work for, we know that heartless corporate greed must be met by organised worker power. We stand with you now and will take your courage to heart as we begin to negotiate our next collective agreement this summer.”