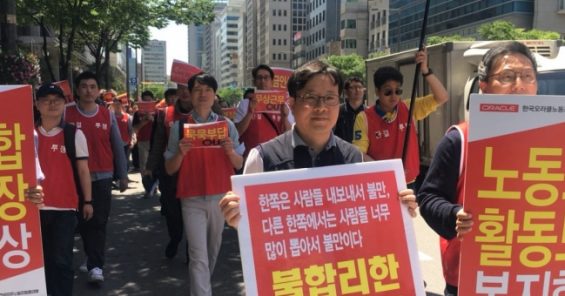 Workers at Oracle in Korea continue their struggle for fair compensation, decent working conditions, and trade union rights in the IT software giant. The Oracle Korea Workers Union have now called their members out on strike since May 16.

The Oracle Korea Workers Union was formed in October 2017 primarily as a response to unfair and non-transparent salary and compensation systems in the company. The average working hours at Oracle Korea are about 80-100 hours per week, yet most workers have seen no wage increase over the last 10 years. The company also unfairly dismissed about 100 workers in 2017, and has failed to recognize full time union officials.

Oracle is one of the world’s largest software companies and made more than $9 billion in profits in 2017. Larry Ellison, the co-founder and now executive chairman of Oracle, is the eight-richest person in the world.