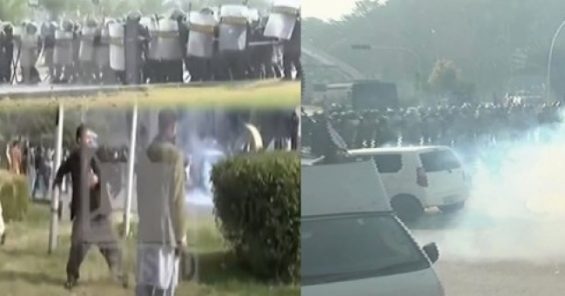 On 11 February, federal level workers in Pakistan won a painstaking 25% increase to their wages after facing down heavy-handed police tactics.

Pakistan’s capital, Islamabad, has in recent times faced swarth of demonstrating workers demanding for long overdue adjustment to their wages. However, the mostly peaceful protests came to an abrupt end last week when the police finally deployed teargas and arrests in a bid to stop the demonstrators from marching towards the national parliament to make their voices heard. At least 27 protestors had been arrested.

UNI affiliate, the Pakistan Postal Union, were among the peaceful demonstrators. They had been participating in the rally to seek a 40% pay raise that has been continuously delayed by the government.

Government officials, alarmed at the turn of events, expedited negotiations with the workers’ representatives. In the discussions, the interior minister reiterated Prime Minister Imran Khan’s concerns about the problems faced by the government employees and had issued directives to solve them at the earliest.

The government eventually agreed to a 25% increase in the salaries of federal government employees with effect from 1st March. The increment is first approved on an “ad-hoc basis”, and will subsequently be incorporated into the pay scales in the upcoming budget. In addition, a new policy would also be developed to address the income disparities between workers of different categories.

The ministers in charge have decided to release all the arrested protestors and also apologized for the use of force by capital police, saying that “it should not have happened”.

UNI Apro Regional Secretary, Rajendra Acharya, praised the Pakistan government’s actions that avoided worsening the situation, saying, “Thankfully, the government was able to quickly conclude an acceptable outcome with the workers’ representatives. It was unfortunate the police had tried to forcefully disperse the protestors. I urge the workers representatives and the government to keep the dialogue going and cooperate in monitoring the agreement’s implementation.”