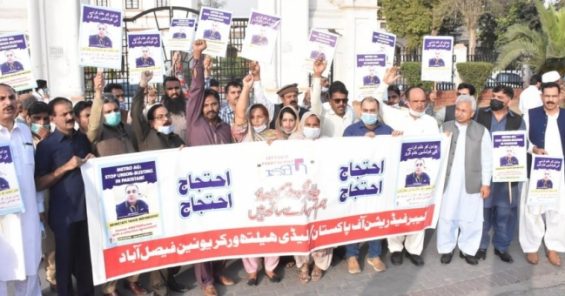 Twenty-six Pakistani trade unions held a rally and a meeting in Faisalabad on 27 March to protest against union-busting at Metro Pakistan and show solidarity with the Metro Habib Employees Union and its general secretary Tahir Mehmood.

Metro AG – the multinational German-based food wholesaler – has dismissed Mehmood and targeted union leaders through warnings, notices, change of workplace and employment status and dismissals. In response, UNI Commerce has launched a global solidarity campaign and started an online petition on Labour Start, which has almost 7,000 signatures.

The meeting in Faisalabad was organized by the UNI Pakistan Liaison Council and included labour federations and unions from commerce, care, finance, post, textile and media among others. Mathias Bolton, Head of UNI Commerce, addressed the meeting through video conference.

“Metro AG should not treat Pakistani workers any differently than the workers in Germany and across the world,” said Bolton.“If the company does not act to stop union-busting at its stores in Pakistan, we will be forced to escalate our campaign.”

Commerce unions across the globe – from Japan to Germany and Nepal to France – have extended solidarity to Pakistani Metro workers through photos, statements, web stories and social media posts.

“Nothing can stop us! We will stand in solidarity until Tahir is reinstated and Metro workers in Pakistan get a collective agreement. Metro must stop union-busting and engage in genuine negotiations with the union”.

The 26 Pakistani trade union organizations unanimously adopted a joint solidarity statement in the meeting calling on global and local management of Metro AG to stop discriminating against Metro workers in Pakistan, reinstate Tahir Mehmood and conclude a collective agreement with the union. The statement is available here.