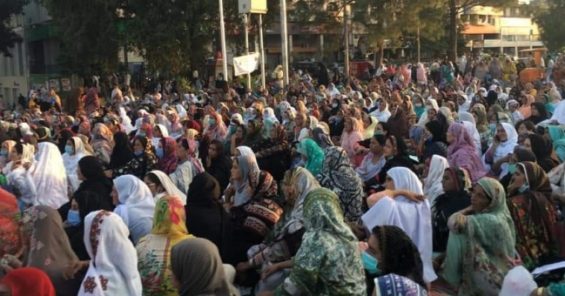 One week following the World Day for Decent Work, Pakistani workers across the country converged in the capital city of Islamabad on 14 October and launched a massive sit-in protest calling for an end to anti-worker and anti-people policies.

The sit-in protest garnered widespread support from a large number of unions, associations and organizations of government & public sector employees. The participants were truly diverse and workers from the postal, banking and insurance sectors were represented by the eight UNI affiliates in Pakistan who were joined by another two unions pending affiliation with UNI.

The protestors marched from the Islamabad Press Club to Jinnah Avenue where the sit-in action took place. Jinnah Avenue is a key road in the central business district of Islamabad leading up the main government buildings. 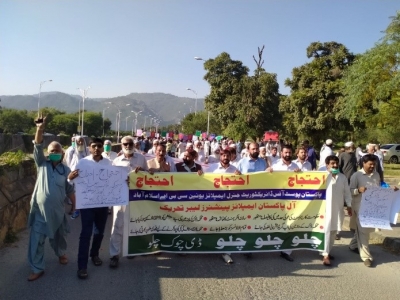 Workers marching down to Jinnah Avenue

During the march, they demanded an end to the neo-liberal economic policies due to the loans taken by the government from international financial institutions.

They also demanded work and wage guarantee by the state, adjustment of wages to inflation, regularization of contract workers, instituting a proper basic pay scale structure, and an immediate end to the downsizing in government departments and privatization of education and health services.

The Lady Health Workers Union (LHWU) was present in full force with its membership comprising all women. Founded in 2015 and formally registered in 2016, this unique union is dedicated to advocating for the rights of women frontline health workers of the government’s primary health care system. They play a key role in delivering services door-to-door within their communities. It has applied for affiliation with UNI Global Union.

Suraiya Waseer, President of the LHWU, praised this gathering as a historic coalition to push the rights and plight of the working-class front and center of the national debate. She said, “There is a growing human rights crisis in the country with more and more people unable to afford food, housing, schooling, medical intervention, or even clean water. We demand that the state fulfil its responsibility toward the welfare of people and ensure access to necessities such as food and shelter.”

While Razia Ashraf, LHWU General Secretary, added, “Unmitigated capitalism hurts women more than men as poverty is much higher amongst women. Privatization of essential services makes it even more difficult for women to access basic and fundamental rights, such as free and affordable education and health, pushing them further into poverty, and into financially and socially precarious positions.” 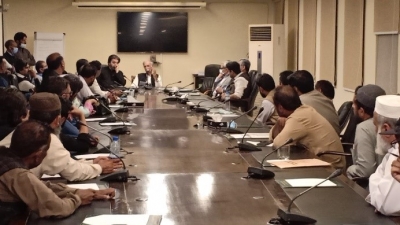 Delegation of workers meeting with Prime Minister’s Adviser on Finance

The workers made their presence felt and their demands heard in the capital. The government received a workers’ delegation to discuss the key demands with the Prime Minister’s Adviser on Finance. Bro Afzal Khattak, President of All Pakistan Progressive Labour Union State Bank of Pakistan represented UNI Pakistan Liaison Council in the delegation.

The negotiation concluded an agreement enumerating 24 key demands which the government will convey to the relevant ministries. The government assured that unions’ access will be facilitated for further discussions. Having secured the written agreement, the union delegation agreed to declare an end to the sit-in protest.

UNI Apro Regional Secretary, Rajendra Acharya, said, “We are very impressed with the wide diversity of workers coming together to voice their demands. The Pakistan government should actively follow up to address the key issues facing the workers. UNI Apro supports our affiliates and they have our solidarity in this struggle.”