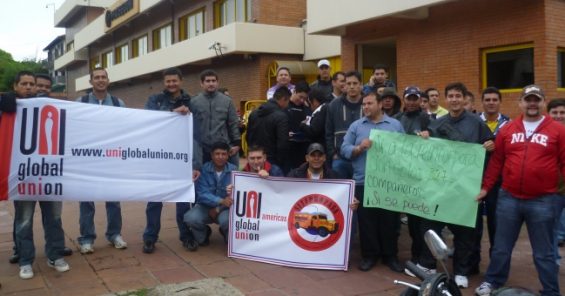 Some 187 former workers at Prosegur Paraguay have filed a complaint with the Inter-American Commission on Human Rights based in Costa Rica. The plaintiffs are claiming damages caused by the Paraguayan State, which did not exercise authority over a multinational company to ensure the fulfilment of the rights set forth in Paraguay’s constitution.

This complaint alleges that administrative and judicial bodies in Paraguay accepted the thesis that the employees were not laid off, but rather reached an agreement with the company. In fact, it was proven that Prosegur used threats and extortion to simulate an agreement, pressuring workers into signing a document in the absence of union or legal representation for the workers involved. According to the testimony of former union officials, Prosegur’s objective was to destroy the union, and consequently, all collective bargaining processes.

Constitutional rights were violated, as were domestic labour law and the international conventions of the International Labour Organization (ILO) signed by Paraguay. “For 8 long years, the workers have been in a state of legal limbo due to the impunity with which the company acted, reinforced by an absent and indifferent State.”

The dismissed workers, having exhausted all internal complaint channels, looked to the supranational body for justice. They consider that “the State of Paraguay did not intervene, did not conduct mediation, did not enforce labour rights, and the company threw the workers out as it chose” (see Complaint Annex).

Eight years have passed since the infamous day, July 30, 2012, when Prosegur dismissed 327 Paraguayan workers en masse and destroyed SITEPROPASA, the Union of Prosegur Workers and Employees.

“This disguised firing exposed indifferent authorities, that – instead of protecting the rights of the most vulnerable – sided with a multinational company and left hundreds of workers and their families on the streets,” said Marcio Monzane, Regional Secretary of UNI Americas; This was done “within the framework of the de facto government of Federico Franco, who had just carried out a coup against Fernando Lugo.”

Since the union was created in 2011, Prosegur refused to engage with its members and failed to respond to workers’ inquiries regarding unsafe conditions during cash-in-transit activities, occupational health and safety, and efforts to pursue collective bargaining.

In 2012, in response to this situation, and the company’s failure to respond to the complaints of its workers, who often had to relieve themselves in their armoured cars, or perform duties in extreme heat in vehicles under poor conditions and without air conditioning, the union decided to go on strike. Faced with this predicament, the company announced it would resume negotiations, but on the day the workers returned to their jobs, they were locked up without legal representatives or advisors and forced to sign a work termination agreement with the threat that the strike would be declared illegal. Subsequently, the company withdrew this declaration, which had served its purpose to produce coercion.  Chronology of events here

Marvin Largaespada, Regional Director of UNI Americas Property Services, expresses his commitment to SITEPROPASA and Prosegur workers throughout the region: “eight years have passed, but we have not forgotten what happened to our brothers and sisters in Paraguay. We continue to denounce this behaviour, and human rights violations in this country and in all countries where irregularities occur with Prosegur workers. “

Prosegur has a presence in more than 26 countries worldwide and had revenues of 160 million Euros in 2019, but this often does not lead to better conditions for its workers. The Spanish private security multinational has been denounced on a number of occasions to the Organisation for Economic Cooperation and Development (OECD) and the ILO, regarding cases in Colombia, Peru, Paraguay and Brazil.