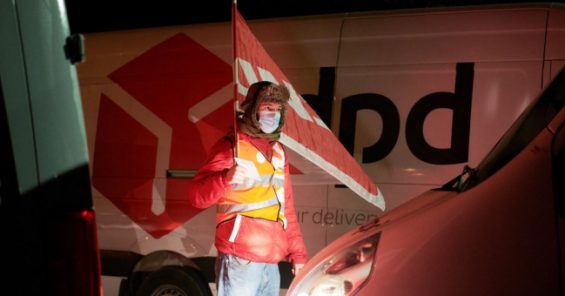 On 1 December, unions from every continent are coming together to voice global demands that DPD-GeoPost respect trade union rights and stop exploiting its subcontracted workforce.

The day of action, occurring as Black Friday and Cyber Monday parcels were set for delivery in many countries, was coordinated by UNI Global Union’s Post&Logistics sector. The actions came in response to DPD’s shocking mistreatment of delivery workers in Switzerland, and the company’s refusal to recognize Unia as a union of workers’ choice. Unions took action on the ground, online and sent a statement of solidarity to their local DPD management.

“Drivers in Switzerland are organizing to address harsh conditions and serious problems with DPD’s subcontracting model,” said Christy Hoffman, General Secretary of Swiss-based UNI Global Union. “But the company has turned its back on good faith negotiations, and its anti-union behaviour here raises serious red flags about company’s treatment of workers globally.”

She continued, “Workers from around the world are coming together to say that DPD must respect union rights in Switzerland and everywhere else it operates as well as stop social dumping through unjust subcontracting.”

Over the past 10 months, Unia, Switzerland’s largest trade union, has documented a litany of problems at DPD for drivers including extreme hours; high pressure and low wages; as well as invasive monitoring; lack of toilet facilities, vehicles in poor condition, weak Covid protections and backbreaking workloads. Nearly all of these workers—if not 100 per cent—are subcontracted out, allowing DPD to keep tight control over their work while avoiding responsibility for workers’ conditions.

“The DPD system here is built on precarity, fear and exploitation,” said Roman Künzler, head of logistics at Unia. “This powerful solidarity sends a message to the DPD workers in Switzerland that unions around the world stand with them. But it also sends an equally powerful message to the company that it cannot get away with violating workers’ rights anywhere.”

In addition to supporting global demands around respecting union rights and stopping the exploitation of subcontractors, DPD drivers organizing with Unia are calling on DPD Switzerland to meet a comprehensive set of conditions, including:

Unia is also demanding that the company negotiate these terms with workers.

DPD-GeoPost, owned by the French state, has signed a global agreement with UNI Global Union and several of its French affiliates. The agreement states that “GeoPost will not present obstacles to union recognition or representation” and “no employee will risk being intimidated, harassed or retaliated against for exercising these rights.”

However, the company has rebuffed UNI’s attempts to mediate the ongoing Swiss dispute under the terms of this agreement, and its anti-union actions run counter to the agreement’s expectations.

Workers report that DPD Switzerland is creating an atmosphere of “repression.” Workers fear dismissal and discipline for being active with the union, and the company even filing a legal challenge that threatens to undermine workers’ right to join their chosen union as well as decades of Swiss labour protections.

Find out more about the situation in Switzerland on Unia’s website in German, French and Italian.