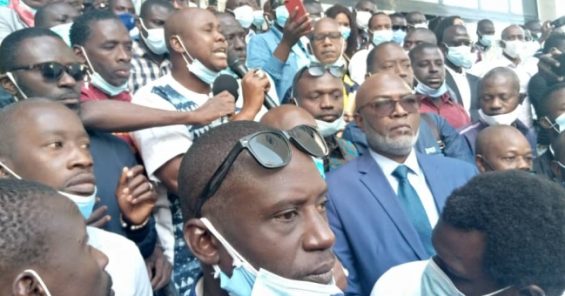 Postal workers in Senegal are staging a series of strikes and sit ins to demand the government pays US$115 million of debt it owes to the state-owned postal service.

The arrears meant Poste Sénégal workers had to wait until January for their December wages and the workers are concerned that their January salaries will also be delayed or even go unpaid.

“The financial crisis at Poste Sénégal is heavily impacting workers, who have struggled to support themselves and their families while their wages were delayed.  Our members are proud of the work they do in distributing items across the country and providing essential services to the public, particularly during the Covid pandemic. The government must pay the post what it owes and stop the degradation of our precious national asset.”

Last month, police attacked postal workers with tear gas during peaceful sit in organized in front of the head office of Poste Senegal in the capital Dakkar.

The trade union leaders have met the Minister of Digital Economy and Telecommunications who promised to pay la poste Poste Sénégal. However, no solution has been found to date and, since then, strikes and slowdowns have been taking place across the country.

“We urge the government of Senegal to take immediate action to finance Poste Sénégal as required. Postal workers are suffering and the inevitable deterioration of postal services will soon be felt by millions of Senegalese citizens unless the government acts now.”

The debt is in part due to the government’s failure to reimburse Poste Sénégal for around US$78 million in family benefits that are paid through the post office, according to UNI Global Union affiliate SNTPT, which is organizing the protest actions.

In addition, the union calculates the post office is owed around US$37 million for operating the universal postal service – the concession for delivering post across the country.