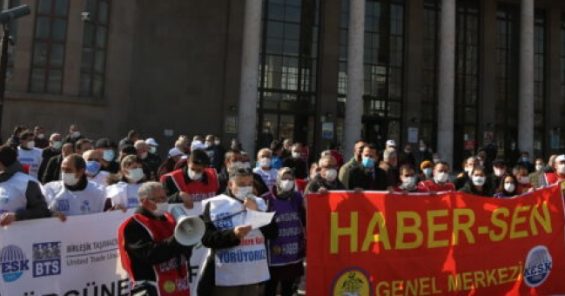 Last week, hundreds of protestors travelled from all over Turkey demand an end to dismissals, union-busting and the forced relocation of trade union activists at Turkish Post.

The protest, which was held in Ankara, was led by UNI affiliate HABER-SEN along with the national confederation KESK, and transport sector union BTS. Protestors came from Izmir (582 km), Istanbul (425 km), Diyarbakir (849 km) and Zonguldak (250km) to voice their frustrations with Turkish Post. Like many other trade unionists at Turkish Post, HABER-SEN General Secretary Ibrahim Damatoglu was forced to relocate 1000 kilometres away with only two weeks’ notice. The march urged the employer to stop union-busting and dismissals, to cease their policy of enforced relocations, and demanded the immediate reinstatement of Damatoglu and other activists to their original positions.

“It’s unacceptable that amidst a global pandemic, Turkish Post is forcibly transferring trade union activists just for exercising their rights to freedom of association and collective bargaining,” said Dimitris Theodorakis, acting Head of UNI Post and Logistics. “We demand that Turkish Post immediately reinstate Ibrahim and other relocated workers to their original positions.”

“We stand in full solidarity with HABER-SEN  members who marched and will continue to support them in the struggles ahead.”

Despite the difficulties of protesting during a global pandemic, around 200 activists travelled from all over Turkey to stand in solidarity against Turkish Post’s actions. The march culminated in a rally of over 500 people at Ankara train station, which was chosen both to commemorate those lost at the October 2015 Ankara bombings, and as the crossroads of the postal and transport service.

The protests shone a spotlight on Turkish Post’s anti-union practices and the forced relocations of trade unionists which are tearing workplaces apart.

HABER-SEN seeks to engage in social dialogue with Turkish Post and will meet to negotiate with management later this week.

HABER-SEN’s situation is not an isolated case. PTT-SEN union, an independent union representing subcontracted postal workers at Turkish Post, saw its executives dismissed by the Turkish Post. Many PTT-SEN members voiced their opposition to Turkish Post’s anti-union actions and were detained overnight by police.  PTT-SEN members have also continued their actions locally and raised picket lines in many cities.